More than 60 businesses on an industrial estate in Hoddesdon signed up to a scheme to combat crime, on a day that the Police and Crime Commissioner David Lloyd visited to lend his support.

The Commissioner attended the launch of the Business Watch scheme in the Pindar Road area on Tuesday (11th March) as part of his ‘District Day’ in which he spent the day in Broxbourne focussing on issues in the borough.

He lent his support to the scheme and talked to local businesses about their needs and concerns. Police and Herts Fire & Rescue Service officers approached every company there to discuss the scheme with 100 per cent agreeing to sign up.

Commissioner Lloyd said: “I am delighted by the response of Hoddesdon businesses signing up to Business Watch. This shows that there is a strong will among businesses to work together to combat crime with the help of public services like the police and fire. My strong belief is that by working together, businesses can better protect themselves from criminals and make our community safer for everyone – this is part of what I mean by using ‘Business Sense’ in policing.”

Stephen Harris, owner of B&T Hire Motor Rentals and Hoddesdon Town Centre Business Forum chairman, was one of the driving forces behind the Business Watch scheme.

“I was glad to be able to talk to the Commissioner about local concerns and what businesses here in Hoddesdon are doing to protect ourselves from crime,” he said. “It is important to encourage businesses to talk to each other about crime rather than simply writing it off as part of the price of doing business.

“It is better to pay more now to better protect ourselves from crime rather than to leave it and count the costs later, after the criminal has stolen or damaged our assets. By working together we can play our part in tackling crime.”

Jill Dockley, Neighbourhood Watch coordinator for Herts Police, added: “It was an excellent response from businesses in the area and we even had businesses nearby but not on the estate coming along to get more information and sign up.” 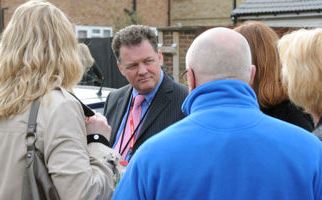 The Commissioner spent all of Tuesday in the borough of Broxbourne focusing on the work of the community safety partnership – these days are called ‘District Days’ and allow the Commissioner to take an in-depth look at the issues and initiatives going on locally.

During the day, he also visited a Community Payback scheme in Essex Way, Hoddesdon, where offenders were cutting back overgrown verges by the side of the road.  The Commissioner spoke to coordinators for the scheme as well as the offenders themselves.

“Making offenders pay is a key part of how I see policing develop in the future and work done in Community Payback is a great example of the positive effect this idea can have,” the Commissioner said.

“From my visit it was clear that everyone involved feels this is worthwhile. Not only does the community get something back for the wrong that has been committed, but there is a lot of evidence that it has a positive impact on offenders. It instils a sense of structure and value that is often missing from their lives.”

The Commissioner also met with local police and welcomed PC Lisa Parker, who is one of five new police officers that have been posted to the Safer Neighbourhood Team in Broxbourne recently.

During the afternoon, he attended a meeting of the Broxbourne Community Safety Partnership’s Joint Action Group in the Council Chamber at Borough Offices in Cheshunt.

He visited Brookland Infant and Junior schools on Elm Drive, Cheshunt, to see a new scheme to improve safety around parking at the schools before going onto Hertford Regional College’s Turnford Campus to talk to students studying for a Uniformed Public Services qualification.

The level three students, aged 16-18, quizzed the Commissioner on a range of issues including police officer numbers, targets, jobs and opportunities in policing and his role and background. The Commissioner also set out his plan for policing in Hertfordshire, running through some of the main themes contained in his policing plan Everybody’s Business.

He then visited a ‘Guardian Gates’ scheme in Northfield, Southfield and Eastfield in Waltham Cross, which is a number of locked gates closing off rear access to many homes in the area.  The project, jointly paid for by the Community Safety Partnership and local residents, has successfully tackled some burglary and vandalism issues in the area.

In the evening he returned to Borough Offices for a ‘Meet the Police and Crime Commissioner’ public forum.

Local councillors and residents, including Neighbourhood Watch members, attended the meeting and the Commissioner discussed with them a range of issues, including the new Safer Neighbourhood officers in Broxbourne.

District Days are a series of events where the Commissioner spends time in each of the county’s 10 districts and boroughs. Each Day allows Commissioner Lloyd to focus on one area in detail for one day, exploring on-going work by police and local authorities, as well as business, charity and volunteer groups in the district or borough, to help keep the local community safe.