The Police and Crime Commissioner, David Lloyd, visited Dacorum on Thursday (6th March) as part of a ‘District Day’ that focused on community safety partnership working. 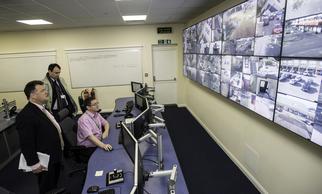 Dacorum Borough Council works closely with the Constabulary on taxi licensing enforcement of around 400 vehicles to ensure their safety and quality.  Unannounced regular operations, like the one on Thursday witnessed by the Commissioner, are carried out in conjunction with spot checks throughout the year. Ex-police officer Richard Mabbitt, who is in charge of licensing for the council said that standards were rising year on year and that it was rare for taxis to have to be immediately removed from the roads by the police. 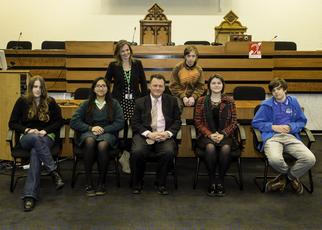 The Commissioner spent time with Deborah Beattie from the Targeted Youth Support team which helps with over 100 young people who have either been arrested, are having serious difficulties at home or are leaving local authority care. She told the Commissioner that early intervention works. She said: “Of the 11- to 17-year-olds who received referral orders from court after committing a crime, 76% of them do not reoffend, which is a really good success rate.”

The centre also helps parents who are struggling to deal with their children and co-ordinates reparation between young offenders and the victims of their crime.

The Commissioner said: “It is clear that a lot of positive work is being done to improve the lives of residents in Dacorum and to change the way that local authorities and police engage with people of all ages, including younger generations. It is so important not to unnecessarily criminalise young people and if we can direct them at the right time, there is a much better outcome for everyone.” 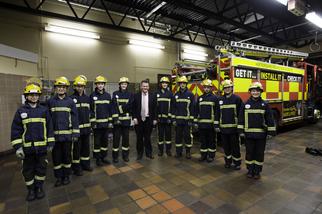 He went to the Hemel Hempstead centre for Spectrum, the Drug and Alcohol Recovery Service for Hertfordshire, where he met a recovering addict who is now a peer mentor supporting others to stop using Class A drugs.  The centre provides help and support, including a medical team, and is part of a countywide service.  Use of Class A drugs can lead to a life of crime so their vital work can directly reduce and prevent offending.

A police patrol included a visit to HMP the Mount’s perimeter to see the security work there which aims to prevent drugs being smuggled into the prison.

Youth Connexions and Hertfordshire Fire & Rescue Services have teamed up to offer youngsters a course as part of their Duke of Edinburgh Award.  Commissioner Lloyd went to see some of them in action at Hemel Hempstead Fire Station.

Discussions at the Youth Forum included what more the Commissioner could do to encourage youth engagement with the police and criminal justice system.

The Commissioner said: “Events like this are very useful. I always include meetings with young people on his district days engagement but we were also looking at expanding opportunities  in other areas such as Citizens Academies and  the police cadets.

Dacorum Borough Council’s Community Safety Partnership Co-ordinator, Dave Moore, who organised the day’s programme said: “The value of working in partnership with other agencies cannot be underestimated.  No single organisation can have such a significant impact on making communities safer - the activities we’ve shown the Police and Crime Commissioner, and much more besides, are keeping crime and anti-social behaviour down, steering potential offenders away from crime and helping people to feel safer.”

District Days are a series of events where the Commissioner spends time in each of the county’s 10 districts and boroughs. Each Day allows Commissioner Lloyd to focus on one area in detail for one day, exploring on-going work by police and local authorities, as well as business, charity and volunteer groups in the district or borough, to help keep the local community safe.

“Engaging with the community across Hertfordshire has been a priority during my first year in office,” he said. “I regularly travel around the county meeting groups and organisations, but these District Days enable me to take a close up look at the work going on within each of the 10 districts and boroughs. I was delighted to visit Dacorum last week.”