The event on Thursday, 3rd April was part of Commissioner Lloyd’s District Day tours around the county and was organised by East Herts Community Safety Partnership.

He began the day with Ch Insp Gerry McDonald at Hertford Police Station for the daily police meeting where incidents from the past 24 hours are discussed and plans of action agreed for the 24 hours ahead.

He was then escorted by Sgt Duncan Wallace from the rural Safer Neighbourhood Team, Insp Chris Hunt and Special Inspector Jo Reay around rural areas, including Standon Green End, Barwick Ford and Woodhall Park near Stapleford, meeting farmers, police volunteers and Special and regular officers who patrol the countryside. 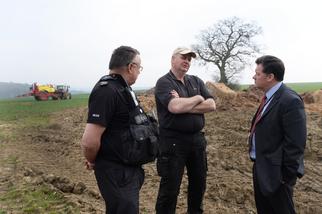 Commissioner Lloyd said: “I was very impressed by the extent of partnership working across a breadth of organisations, from the emergency services to charities and the voluntary sector.  It is so important to work together to protect the most vulnerable in our communities as well as tackle crime – working as a team means messages are reinforced and barriers are broken down, resources can be shared and people feel safer.”

He added: “The police officers told me how relationships have improved enormously between them and people living and working in rural areas since specialist teams have been in place. They have increased knowledge of the areas and their understanding of the unique issues faced in the countryside.  Rural crimes, from fuel theft to poaching, are tackled effectively and the communities have more confidence in police. There was nothing but praise on both sides.” 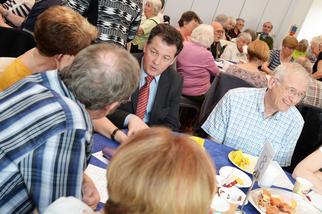 Later, he addressed an audience of 180 older people who were attending  a partnership event called ‘Crucial Crew’, involving Hertfordshire Fire and Rescue Service, Trading Standards, police, Neighbourhood Watch,  Groundwork and the Samaritans. Hertford Regional College event management students and Year 9 pupils from Presdales School provided catering and waited on tables while attendees discussed safety issues and how to access a range of help and support services.

The Commissioner visited the home of an elderly resident, vulnerable to crime, where Operation Stomp was transforming the neglected garden to reduce the risk of criminals targeting the address. Insp Hunt, who initiated the Operation in East Herts after helping a neighbour who was a victim of crime, explained: “PCSOs who are carrying out regular patrols around towns and villages are able to identify the homes of vulnerable people.  We then organise volunteers to come and in and tidy up the exterior and front gardens which puts off offenders.  It’s a simple but extremely effective way to better protect older and vulnerable people." 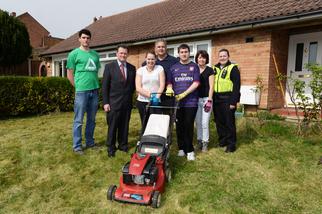 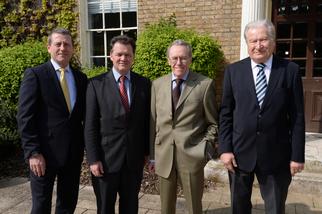 Cllr Alexander said: “This was a valuable opportunity for the Police and Crime Commissioner to see some of the great work that’s going on in the district, with a focus on projects where the council and police are working together to keep East Herts safe.”