A local school has joined forces with Community DriveSafe to reduce speeding in their village with a new eye-catching roadside banner. 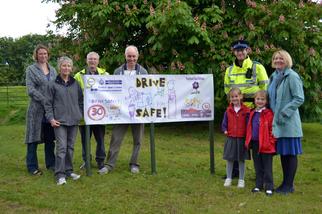 Pupils from Therfield First School, near Royston, the local Community DriveSafe team and Hertfordshire Constabulary unveiled a new banner on The Causeway in Therfield on Monday, May 12.

Launched by Commissioner David Lloyd, Community DriveSafe gives residents and local businesses the opportunity to take an active role in making their communities safer by tackling speeding where they live. The volunteers use police monitoring equipment to encourage speeding motorists to slow down. And, if motorists don’t comply, local Safer Neighbourhood policing teams can step in and take enforcement action against offenders.

Therfield’s DriveSafe volunteers had asked the Constabulary and Therfield School if they wanted to get involved in speed awareness. As a result, PCSO Chris Brabrook from Royston’s Safer Neighbourhood Team and DriveSafe’s David Whitby visited the school to host a speed awareness assembly where the children were told about speed limits and keeping themselves safe near roads.

At the end of the assembly the children were asked to design a poster to remind motorists to slow down when driving through their village and keep to the 30 mph speed limit. The best posters would feature on a banner to be placed on a stretch of road where motorists to tend to speed.

Commissioner Lloyd, said: “I was delighted to hear of this initiative and how the children have had the chance to be creative whilst reminding drivers to keep to the speed limit.

“Speeding is a real concern to a lot of people. I’ve been told by countless residents, in both rural and more built up areas, that they are fed up with seeing reckless motorists driving above the speed limit and in a manner which leaves them feeling unsafe outside their homes. I am sure that the banner will make a real difference in the local area and I would encourage other communities to get involved in DriveSafe if they are experiencing similar problems with speeding motorists.”


For further information about DriveSafe and how to start up a scheme where you live, please click here.