A group of residents in Ickleford, who have been campaigning with their Parish Council against speeding motorists, launched the first DriveSafe scheme in the village on Friday, July 4th. Devised by Hertfordshire’s Police and Crime Commissioner, David Lloyd, DriveSafe enables local residents to take the driving seat to address speeding in their neighbourhood. 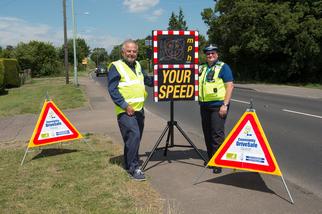 DriveSafe is primarily for road safety education and raising awareness of speeding, with motorists receiving a warning letter if they are over the speed limit. And, if issues aren’t resolved by local people taking action themselves, the police Safer Neighbourhood Team can step in to carry out speed enforcement which means that drivers can be fined or even prosecuted.

Most DriveSafe schemes will be instigated by ten or more residents submitting a petition and nominating at least three volunteers to Commissioner Lloyd. He then asks Hertfordshire Constabulary to assess the location for safety and then provide the equipment and training for the volunteers to carry out their speed monitoring.

The team of volunteers, which was set up with the help of Ickleford Parish Council and Ickleford PCSO Deborah Parfitt, includes local residents Mike Palmer, Ken Chapman, Patti Barfoot and Mick Barber.

The team of volunteers will be regularly monitoring vehicle speeds along Bedford Road and Arlesey Road in Ickleford.  Wearing high-visibility jackets and operating an electronic Speed Indication Display sign (SID) they will be targeting drivers who ignore the 30mph limit. Any drivers found exceeding the limit will have their car registration numbers recorded and a warning letter sent to the registered owner of the vehicle. Repeat offenders run the risk of a visit from the police - and further police action being taken.

Commissioner David Lloyd said: “Speeding is a real concern to a lot of people. I’ve been told by countless residents that they are fed up with seeing reckless motorists driving above the speed limit and in a manner which leaves them feeling unsafe outside their own homes.

“Motorists driving too fast don’t always appreciate the fear, anger and frustration felt by pedestrians and householders. They are failing to respect the residents who live and work in these locations – and failing to respect the law. I want to see people being empowered to do something for themselves about a serious issue that concerns them – this is what Community DriveSafe can do.”

Mick Barber, the scheme’s co-ordinator and Ickleford Parish Councillor, said: “We are seeking to put the brake on those drivers who choose to ignore the limit by making them aware of the dangers involved in speeding and of the annoyance they cause to residents of this area. We want to educate and deter.”

Chief Inspector for North Herts Donna Pierce added: “Community DriveSafe is a scheme which gives local residents and businesses a chance to take charge of their local roads. The scheme is about educating drivers around the dangers of speeding, however, we will take action against repeat offenders.

“Speeding is one of the issues often highlighted by many residents in Ickleford and making our roads safer and getting tough on speeding motorists is a key priority for us.”

There are already 34 Community DriveSafe schemes already active across Hertfordshire but the Police & Crime Commissioner is urging more people to think about starting up a scheme where they live.

Commissioner David Lloyd added: “As part of my Volunteering Strategy, launched with Hertfordshire Constabulary during National Volunteers Week at the beginning of June, I want people to get more involved in making their own communities safer – it’s not just the job of the police. DriveSafe, tackling anti-social motoring, is just one way that you can play your part - there are plenty of oth r existing opportunities, from Neighbourhood Watch to becoming a Special Constable, different roles that can suit even the busiest person who doesn’t think they have the time to volunteer.


For more information about the different volunteering opportunities visit www.herts.police.uk/volunteers