Support for older people, youngsters excluded from school and minority ethnic groups were all in a day’s work for the North Herts’ community safety partners escorting Hertfordshire’s Police and Crime Commissioner for one of his regular ‘district days’. 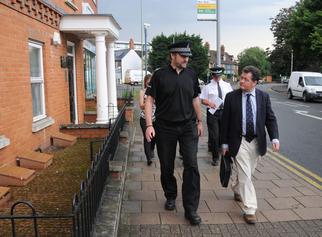 Commissioner David Lloyd spent Friday July 18th in and around Hitchin and Letchworth Garden City to get a feel for local issues and the views of local residents and businesses.

He said: “The highlight for me on such a diverse and interesting day was how well partnerships have gelled across the district and how the local police are involved and proactive across a broad range of other agencies.

“It’s bit of a whistle-stop tour but during my ‘district days’ I get a real flavour of the partnership working that is really helping to make a difference to people’s lives.”

After a short stop at Hitchin Police Station, the Commissioner’s first visit was to North Herts Education Support Centre where he joined the Community Safety Co-ordinator for Hertfordshire Fire and Rescue Service, Watch Commander Mark Burgess for a ‘Blue Light Experience’.

The centre supports students who are excluded from mainstream education and/or those at serious risk of permanent exclusion, and the Blue Light Experience gives community safety information and advice in an interactive format to the young people attending the centre, for example they learned, with a live demo, how firefighters use specialist machinery to safely release people who have been trapped in cars in road traffic collisions. 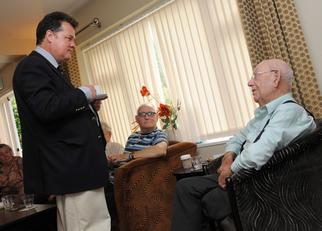 The next stop was with Age UK at sheltered accommodation, Girton Court, where the Commissioner spoke briefly about his role and talked to residents and neighbours about their crime and safety concerns.  The residents are visited regularly by police, Age UK and other partners to give crime prevention and safety advice, for example, about how to avoid rogue traders and distraction burglary.

The Commissioner then visited a Community Reassurance Event being held in Hitchin town centre.  The event involves several agencies including Trading Standards, police and fire fighters giving out information to shoppers, traders and visitors.  These regular events usually include market stall inspections (dealing with counterfeit goods, for example) or anti-shoplifting/purse dipping patrols.

He also stopped by to meet the joint chairs of Hitchin BID Peter Hawkins and Simon Kirbyshire with member Simon Day, manager of Waitrose.  They discussed the role of BID Rangers who help police to deal with shoplifting as well as ensuring the town remains clean and tidy, and the advantages of businesses working together. 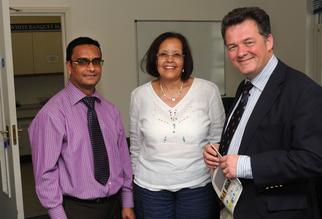 The final stop was to see the council’s Careline in action. Careline is a community alarms service which uses technology connected to the telephone network to help people live securely and independently in their own homes for as long as possible.  The service works closely with the emergency services and is also involved keen to expand its services to support areas such as distraction burglary and domestic violence.

“We look forward to the continued partnership with him and his team to help keep North Herts a safe place to live, work and visit."