The Police and Crime Commissioner for Hertfordshire, David Lloyd, saw first-hand a series of local schemes and programmes tackling crime and anti-social behaviour (ASB) in Three Rivers during a recent ‘district day’ visit. 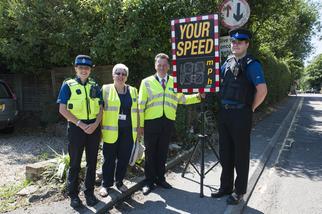 The Commissioner’s day spent in the district, on Tuesday (July 29), took in a host of successful projects, including a DriveSafe scheme, and youth diversionary projects such as a skatepark and youth citizenship course.

The day kicked off with a briefing with Chief Inspector Deirdre Dent at the Police Station in Three Rivers House, Rickmansworth. They discussed the latest crime figures and emerging crime trends before the Commissioner sat in on the Constabulary’s Daily Management Meeting where crimes from the previous 24 hours in the county were discussed and a strategy agreed for the following 24 hours.

The Commissioner then went straight from the Chief Inspector’s office to Cllr Ann Shaw’s office in the same building again to discuss issues affecting the local area. Cllr Shaw is the leader of Three Rivers District Council and district and borough authorities are key partners for the police.

Commissioner Lloyd then visited a Drive Safe scheme in operation in Solesbridge Lane, Chorleywood, with PCSO Cloe Hatch. Drive Safe, which was launched by the Commissioner in April 2013, is a scheme that empowers residents who are concerned about speeding can volunteer to use speed detection equipment to monitor the speed of vehicles. A Speed Indicator Display Sign, or SIDS, is also used to tell approaching motorists what speed they were doing and those found to be speeding are sent warning letters.

The Commissioner observed the speed monitoring and spoke to the Solesbridge Lane scheme’s lead volunteer Valerie Steel, who explained how local homes on the narrow road are affected by drivers driving fast along the road. Valerie is planning to invite more local residents to take part in the scheme.

He then returned to Three Rivers House to meet members of the Anti-Social Behaviour Action Group (ASBAG), which is a multi-agency group that works together to tackle anti-social behaviour (ASB) issues across the district. The district has seen a drop in reports of ASB in the last year and the Commissioner discussed the group’s work, the challenges they face and the issues they see going forward.

During the afternoon, Mr Lloyd toured the Abbots Langley policing area with Sgt Neil Canning from the Safer Neighbourhood Team. The Commissioner spoke to local businesses in School Mead and discussed the issues affecting them.

He then visited the Croxley Green Skatepark to see how the TRDC-owned and run scheme provides a place for young people to practice tricks and stunts on their skateboards, scooters and bikes.

The next stop in the day was a tour of South Oxhey with PCSO Matt Perrin. The Commissioner was updated on measures put in place in the area to help protect older generations from criminals that may try to target them. Following this he travelled to the South Oxhey Youth Project in Gosforth Lane to meet a group of 15-17-year-olds who were taking part in a National Citizens Service scheme, run by Youth Connexions.

The Commissioner’s last appointment of the day was to speak and answer questions from residents at the Hillside Residents Association in Abbots Langley. Also in attendance was Sgt Canning who could answer operation questions about policing in the area.

The Commissioner’s ‘district days’ are days spent dedicated to and visiting one of the county’s 10 districts or boroughs, learning about local issues and visiting schemes, initiatives or groups related to crime, anti-social behaviour or public safety. The days allow the Commissioner to focus in depth on one particular geographical area for the day.

Commissioner Lloyd said: “This was an interesting and informative tour of Three Rivers.

“I was impressed to see how police and their partners can and are coming together in the ASBAG group in order to tackle ASB in the district. I support this kind of working and actively encourage it through my crime and policing plan for Hertfordshire. I have said on many occasions that responsibility for tackling crime and ASB is not just the responsibility of the police but that all sectors of the community have to be involved if we are going to beat it.”

Cllr Shaw added: “It is a valuable opportunity to discuss local Three Rivers District Council issues with the commissioner.”