The Police and Crime Commissioner for Hertfordshire saw how volunteers are playing their part in preventing crime and anti-social behaviour before it occurs in Hemel Hempstead recently.

David Lloyd visited a number of schemes and projects in Hemel and Berkhamsted as part of his ‘District Day’ in Dacorum on Tuesday (September 16) where he saw how they worked and discussed what help he could offer. 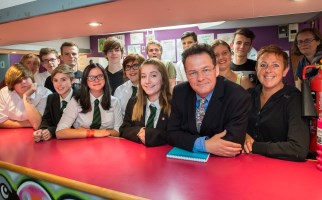 However the day kicked off at Gaddesden Row School where he spoke to the pupils there about his role and the children had the opportunity to quiz him.

“The children certainly weren’t shy in asking me some challenging questions,” said Commissioner Lloyd, of the primary school youngsters. “It was a fun experience taking part and the children are a credit to the school.”

The Commissioner then visited the South Hill Centre in Cemetery Hill, Hemel, where he met Kim Hobbs. Kim is a volunteer based at the centre who offers mentoring and support to offenders leaving prison, helping them to re-adjust to life on the outside and avoid slipping back into re-offending.

His next stop was at Mediation Hertfordshire in Hemel, which – largely through a network of volunteers – helps to mediate on a wide range of disputes affecting people in the county. The organisation has resolved or de-escalated many conflicts between parties that would otherwise take up a lot of police time.

The Commissioner said: “I was interested to speak to both these groups as they both chime strongly with my vision for Hertfordshire with all sectors of the community being involved in reducing crime and anti-social behaviour.

“Offenders leaving prison often return to a chaotic lifestyle when they arrive back in the community, which can sometimes mean that it is all too easy to fall back into a life of crime.

“I’m particularly interested in breaking this destructive cycle that ruins lives. If we can divert these ex-offenders away from re-offending then not only will they be more likely to contribute positively to society but there will be less crime and fewer victims in the future. Kim’s volunteer work is very much in this area and so I was keen to learn more about his experiences and ambitions.”

He added: “Mediation Hertfordshire’s work also interests me as I believe we can do more in the county to intervene in disputes that would otherwise take up many hours of police time through unnecessary calls or investigations.

“With the right intervention, I believe there are many instances where conflict could be resolved within the community and that gives a better outcome for both parties than the police or courts might be able to offer them.”

Kim said: “It's all about giving people friendship and support so that they can change their lives.  Resettlement after prison is challenging and I aim to help the guys make good choices as they face up to their future. By not returning to crime, they build better lives for themselves and a better community for all of us.”

The Commissioner’s ‘district days’ are days spent dedicated to and visiting one of the county’s 10 districts or boroughs, learning about local issues and visiting schemes, initiatives or groups related to crime, anti-social behaviour or public safety. The days allow the Commissioner to focus in depth on one particular geographical area for the day.

During the day, the Commissioner also had a presentation at Hemel Fire Station about the Think Safe project, which provides help and guidance to vulnerable people to learn how to stay safe.

Participants, who often have learning disabilities, are taught about how to recognise danger, understand when they have been a victim of crime and where to seek help if they need it. The Commissioner was presented with a certificate for taking part in a taster session.

For the final stop of the day, David Lloyd visited the Swan Youth Centre, pictured, in Berkhamsted which offers activities for young people between the ages of 12 and 18 in a safe and friendly environment.

Dave Moore, Dacorum Community Safety Partnership (CSP) Coordinator, said: “I am pleased that the Commissioner has been able to see at first hand the good work that goes on in both the Swan Youth Centre and the Think Safe project.

“The CSP has been working with both groups, who share our aim of keeping Dacorum a safe place for our young people and those who are vulnerable. Community Safety is everybody’s business and these groups have certainly stepped up to take on that responsibility.”