David Lloyd has revealed that he intends to simplify the running of his fast-growing DriveSafe scheme so that volunteers can spend more time encouraging speeding drivers in Hertfordshire to slow down.

The Police and Crime Commissioner for the county announced proposed enhancements to the scheme at the DriveSafe Annual Meeting at Police Headquarters in Welwyn Garden City on Thursday (October 23) which was attended by lead volunteers from across the county. 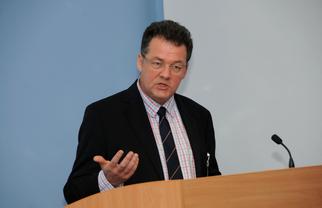 DriveSafe was launched last year by the Commissioner in order to empower members of the public concerned about speeding in their neighbourhood to set up a speed monitoring group with the help of police. The scheme has grown since its introduction and there are currently 31 schemes running in the county involving 264 volunteers – with more schemes in the pipeline.

The scheme has been running for more than a year now and the Commissioner has taken the opportunity to see how it could be improved.

Addressing the group, the Commissioner said he wished to make changes so that individual schemes can be set up more quickly and so volunteers will be burdened with less administrative work associated with collecting the details of speeding vehicles. 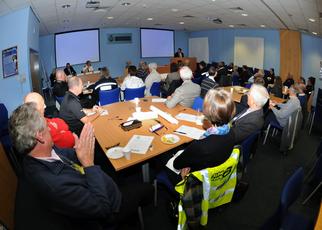 Currently the volunteers have to complete time-consuming vetting checks which can delay the start of a new DriveSafe group and they also have to spend a significant amount of time inputting data into police computer systems. However other security measures will be implemented so that these checks are not necessary and the inputting of data will be taken over by a member of police staff paid for by the Commissioner. It is hoped that the new scheme will be up and running next year.

The Commissioner said afterwards: “I know that the vast majority of people who volunteer do so because they want to make a positive difference to the world around them. These changes will mean that DriveSafe volunteers will be able to spend more time doing what they signed up to do, which is encouraging speeding drivers to slow down, rather than sitting inside a police station inputting data into a computer.”

He added: “I have a volunteering strategy that aims to encourage and support people who want to volunteer to make Hertfordshire a safer place that is better prepared to help reduce crime. I am committed to this aim and these changes announced at the DriveSafe Annual Meeting show that I am willing to take action where necessary.”

The changes were warmly greeted by the volunteers present at the meeting.

During the meeting the Commissioner, alongside police officers and staff involved in running the scheme, discussed with the volunteers issues around the scheme and ways it could be improved and answered questions from the volunteers.

The volunteers also took part in a workshop designed to help share their experiences and best practice for running effective schemes. Cliff Noble, a lead volunteer from Stevenage, gave a presentation explaining his group’s successful scheme.

Commissioner Lloyd said: “The meeting is an excellent opportunity for the Constabulary and me to hear the views and feedback directly from the volunteers.

“I am delighted to see how quickly DriveSafe has grown since it was launched and that is due to the dedication and community spirit of the volunteers. They raised many interesting and useful points and this information will be used to help shape DriveSafe in the future and support other groups as they set up more schemes around the county.”

DriveSafe was set up by the Commissioner in April last year to allow anyone in Hertfordshire who has concerns about speeding in their area to tackle the issue themselves. It requires ten or more residents or local businesses to sign a petition expressing concern about motorists speeding in a particular location and at least three people to volunteer to actively run it. The road must already have a 30mph limit for safety reasons. (If your road has a 40mph limit or above, please contact your Safer Neighbourhood Team.)

A police officer will assess the road for a suitable and safe location and the fully-trained volunteers will be issued with high-visibility jackets and roadside warning signs. They are trained by police officers on how to use speed detection equipment and to monitor the speed of vehicles.

They use a Speed Indicator Display Sign (SID) to tell motorists what speeds they were travelling. A smiling face indicates an acceptable speed, within the limit, and a sad face means the driver is going too fast and can expect a warning letter. Repeat offenders will be visited by a police officer about the offence.

You can access your own online petition via the Police and Crime Commissioner’s website www.hertscommissioner.org or you can request one by ringing the Commissioner’s office on 01707 806100