New measures to help police and partner agencies to tackle anti-social behaviour come into effect yesterday (20th October) and are welcomed by Hertfordshire’s Police and Crime Commissioner who will oversee some of the new measures in the county. 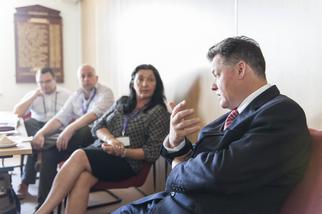 The Community Trigger and Community Remedy are key parts of the new legislation that empower the public and give them more influence over how ASB is dealt with in their area.

Commissioner David Lloyd said: “I have been working closely with our local authorities partners for months in the build-up to this change to ensure that we are poised for action when we are called upon for help by our communities.  While anti-social behaviour has reduced quite dramatically in Hertfordshire over the past few years, this takes us a step closer to improving lives which are still blighted by the anti-social behaviour of others.

“Quite simply, this new legislation puts victims first. The revised powers will assist local authorities to deal with the issues raised and the Community Trigger, in particular, enables those in the most desperate straits to demand that action is taken.”

“In addition the Community Remedy Menu for Hertfordshire has been shaped by the people who live and work in this county and means that offenders really do pay for the harm they have caused, which is one of the key aims of my Police and Crime Plan, Everybody’s Business.”

Individuals, businesses or communities can activate the Community Trigger if they have reported incidents of ASB to the police or other partner agencies and feel no one is dealing effectively with the problem.

In Hertfordshire the Community Trigger can be used if you have made three reports of ASB to police, your local council or your local housing provider during a six month period and you feel nothing has been done, or more than one person or group has made three reports of ASB involving the same location, culprit or problem to police, local council or housing provider within six months.

Once the Trigger is activated an action plan, involving the police, council and any other relevant authority, will address the issue and feedback to the reporting person or group.

The new Community Remedy Menu for Hertfordshire gives victims a choice, for the first time, about how offenders are punished for low-level crime and anti-social behaviour.

Following public consultation across the county by the Police and Crime Commissioner, victims can decide one of three options - that offenders should make financial reparation directly to them, sign a behaviour agreement or make a verbal or written apology.

In the future, other options that will become available include: non-monetary reparation, such as repairing damage; taking part in a structured diversionary activity, such as a training course; or the offender accepting a referral to relevant supportive services such as substance misuse or mental health services.

Commissioner Lloyd said: “The Menu is workable, reasonable and proportionate but also gives victims themselves a voice – a true say in how they want to be compensated for what has happened to them.

“Victims must be at the heart of everything we do. Every victim is different but this new approach gives an opportunity for victims of low level crime and anti-social behaviour, where an offender has been identified, to take back some control over what has happened to them.

“With that, I am confident that this will help their recovery and route back to normality after what may have been a very traumatic or disruptive experience for them.”

The Community Remedy will be administered by a ‘responsible person’, usually a police officer. Victims are not compelled to make a choice, if they prefer not to do so the responsible person will decide the most suitable punishment.

Generally all six options were supported.  Another respondent added: “Make the punishment fit the crime. If found graffiti-ing, for instance, make them scrub it off or repaint the wall at their own expense. This should make them understand the consequences of their actions.”