The Police and Crime Commissioner for Hertfordshire spent a day in Broxbourne on Monday (October 13) seeing the power of partnership working to reduce crime and anti-social behaviour.

During the ‘district day’, the Commissioner David Lloyd spent time with environmental enforcement officers from Broxbourne Borough Council, known as The Field Force. The Commissioner travelled around the borough with The Field Force officers as they explained the work they do to tackle so-called ‘enviro-crimes’. These include fly-tipping, graffiti, fly-posting, abandoned vehicles, littering, dog fouling and obstructive parking. 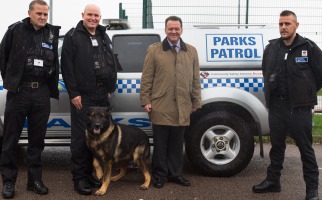 While these officers are employed by the council, they are part of the wider policing family and have powers under the Community Safety Accreditation Scheme to deal with low-level anti-social behaviour.

Members of the Parks Patrol team in Broxbourne, pictured above, are accredited under the same scheme and, later in the day, the Commissioner also joined them to see their work. The team is employed by Parkguard, a private security company jointly paid for by the borough council and Lee Valley Regional Park Authority, and its ‘beat’ is the parks and green spaces of the borough.

Commissioner Lloyd said: “While fly-tipping or dog fouling might be considered ‘low-level’ by some, they can have a big impact on the community by visually spoiling the area and leading to the perception that it is unsafe. Furthermore, lower-level crime or anti-social behaviour can often lead to more serious kinds of crime.

“I was very interested to see how these two council-led initiatives bring a range of benefits to the people of Broxbourne, including reduced crime and increased community safety. I believe in the strength of working in partnership and these schemes show what can be achieved when police, councils and even private businesses work together to a common aim. Crime is Everybody’s Business and this is Everybody’s Business in action.”

These were just two visits of the visits on the day with the Commissioner starting the day at The John Warner School in Hoddesdon, where he spoke to pupils about how crime affects them and what is means to be an elected politician.

The Commissioner visited Hoddesdon again during the day to meet the borough’s new Chief Inspector, Dean Patient, right, at the police station and the afternoon also saw a visit to Tesco’s headquarters in Cheshunt and a meeting with the supermarket’s investigations manager from its retail security department. 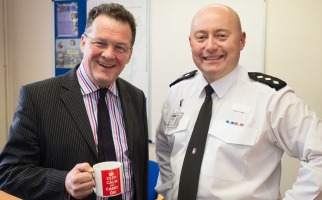 He also visited local charity, The Gifted in Waltham Cross, which has been commissioned by Hertfordshire County Council to develop a sustainable local approach in the borough to prevent substance misuse. The Commissioner heard how the charity does this through the provision of a range of activities and interventions that support and focus on promoting emotional and physical health.

The final event was a public meeting held in the evening at the council’s offices. Residents raised a number of issues with the Commissioner, including anti-social behaviour in Hoddesdon and speeding traffic in Cheshunt.

Councillor Tim Hutchings, Broxbourne Borough Council’s Cabinet Member for Public and Environmental Protection, said: “We were delighted to welcome the Commissioner to our Borough and showcase some of the work we do to keep Broxbourne a safe and pleasant place to live.

“These visits are important because they allow a wide range of people to air their views. It was great for him to meet young people from The John Warner School and some residents who were able to express concerns over specific issues. It’s essential that both he and I listen to these views and act accordingly.”