The Police and Crime Commissioner for Hertfordshire spent a day in Welwyn Hatfield last Friday (October 3) visiting a number of schemes around Hatfield which showed how both volunteers and local agencies are working together to play their part in preventing crime and anti-social behaviour. 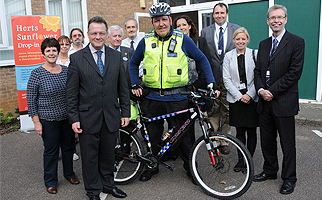 Commissioner David Lloyd began his tour at Hatfield Police Station where he met local Chief Inspector Adam Willmot to discuss local policing issues, including Operation Balsam that starts this week with the beginning of term for the University. It is which is a joint police and council operation to reduce noise and crime around the campus and among students. Ch Insp Willmot also announced the arrival in the next fortnight of four new PCSOs.

Police Community Volunteer Terry Morris showed Commissioner Lloyd the award-winning OWL (online watch link) system which police and Neighbourhood Watch use to communicate with almost 70,000 members across the county (photo). Terry will also be working with Welwyn Hatfield Borough Council, Trading Standards, the fire service and the health Clinical Commissioning Group on the Safer Together programme.

Welwyn Hatfield Borough Council’s Community Safety Partnerships Co-ordinator Chrystalla Karvella and local Fire Station Commander Rob Day explained that Safer Together in Welwyn Hatfield is designed to protect vulnerable people and support their carers and families. It is supported by the Commissioner’s Citizens’ Academy programme which is due to launch later this year.

Commissioner Lloyd said: “At the heart of community safety is the community itself - I am a firm believer in active citizens and responsible local organisations playing their part to keep Hertfordshire safe. Here in the borough of Welwyn Hatfield I have seen community safety at its best – volunteers, local authorities, police and charities working as a team to tackle crime, road safety and anti-social behaviour. 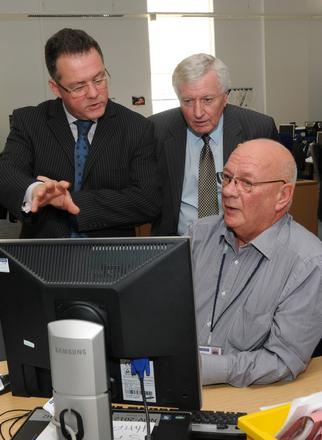 “I am delighted to hear that more PCSOs are joining the Welwyn Hatfield team – they are a very popular addition who make such a difference in communities. They can often be seen out and about on their pedal cycles – a welcome and reassuring sight for many residents and businesses.”

A visit to the Hatfield Hub in White Lion Square highlighted issues facing tenants and landlords of privately-rented multi-occupancy homes of which Hatfield has several thousand. Every Friday council staff at the Hub offer free advice to both landlords and tenants to ensure that they are aware of what is expected of them and what their rights are (photo available).

The Hub is also used for neighbourhood surgeries by the police Safer Neighbourhoods Team, local councillors and the Fire and Rescue Service. On the day, local firefighters showed the Commissioner some of their talks and hard-hitting videos from a campaign aimed at young drivers to improve their safety on the roads and save lives. The Council for Voluntary Services, Hatfield Town Council and Victim Support also use the facility.

Commissioner Lloyd was then escorted to Gracemead House where, from mid-November there will be a weekly Sunflower Drop-In offering advice around domestic abuse (photo). Later he visited a women’s refuge with Sharon Montgomery who is chair of Welwyn Hatfield Domestic Abuse Forum.

He said: “Domestic abuse is a crime that has devastating consequences for victims and families.  I am determined that the police, other agencies and charities continue to work together to support victims. They should also do everything possible to prevent domestic abuse, ensuring that they tackle the causes of abuse as well as the consequences so I was impressed to see the great work in Welwyn Hatfield.”

Towards the end of the day the Commissioner went to the University of Hertfordshire, to see how the work of its Law School might help to shape future services for victims in Hertfordshire.  The final stop was to see Resolve, a charity he has supported with a Commissioner’s Community Fund grant helping people with drug and alcohol issues.

Cllr Bernard Sarson, Welwyn Hatfield Council’s Executive Member for Community Safety (photo available), said: “It was a great opportunity to show the Commissioner some of the ways the partners are responding to things that matter to local people, including using our Hatfield Hub in White Lion Square to make it easy for people to get advice and help.

“We showed that we are leading the way in many of the Commissioner’s priorities, including protecting vulnerable people, tackling domestic abuse, and (through the university) looking at introducing mediation into the justice system.”