Community safety and partnership working were themes of the day when the Police and Crime Commissioner for Hertfordshire visited Stevenage on Monday (November 10) during his ‘District Day’ around the town. 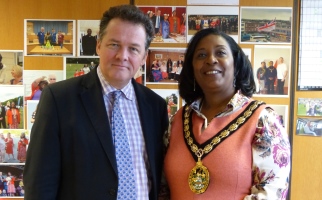 The summit with the Mayor was part of the Commissioner’s latest District Day, one of a series of visits where he spends a day in one of the county’s districts or boroughs focusing on policing, crime and community safety issues from a local angle.

The day included Monday morning’s regular meeting at Stevenage Police Station, where senior officers come together to assess the crimes and incidents that occurred over the weekend and discussing a plan of action for the week ahead.

Commissioner Lloyd and Deputy Commissioner David Gibson sat in on the meeting followed by the Force-wide Daily Management Meeting where the Stevenage Chief Inspector Richard Harbon linked in with colleague around the county to discuss crimes, resources and planning for the next 24 hours.

The Commissioner was then given a briefing at the police station on the SafetyNet system which is used by police and partners to log reports of anti-social behaviour (ASB) issues around the county.

Sgt Richard Wilmot, right, whose community safety remit covers the whole of Stevenage and North Herts, gave the Commissioner a guided tour of the internet-based system and how it is used to record problems as they arise and manage on-going problems and log evidence of ASB. 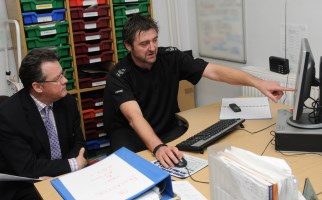 Hertfordshire has seen a significant fall in reports of ASB in recent years which is partly attributed to the use of this system.

The Commissioner then visited the Mental Health Unit at the Lister Hospital which is run by the Hertfordshire Partnership University NHS Foundation Trust (HPTF).

Police often come into contact with people who are suffering from severe mental health conditions and Mr Lloyd learned more about the treatment of patients in the unit.

Commissioner Lloyd said: “This was a very informative visit to Stevenage, which included meetings with some of the police’s key partners in the town as well as a thorough look at SafetyNet.

"This system is a key tool in the work to reduce ASB and has seen some excellent results in recent years in Stevenage and across the county.

"I was keen to understand if police and its partners were using it in the best possible way and what potential there was for its use in other areas as a platform for partnership working.

“Meeting with the Mayor was positive and her insights into some of the excellent community projects that exist in Stevenage that teach skills which will help young people get jobs and divert them away from wrongdoing were very helpful.

“People who are suffering a mental health crisis can often find themselves in contact with a wide range of public services, including police, so I was keen to see how the unit works and how the services work together.”

Cllr Sherma Batson DL MBE, Mayor of Stevenage, said: “I was very pleased to welcome the Police and Crime Commissioner. As well as discussing issues of concern, I was able to highlight some of the recent community safety success stories from Stevenage, many of which have involved the work of volunteers in our town.”

Professor Oliver Shanley, Director of Quality and Safety at HPFT, said: “We were delighted the Commissioner visited us this week so that we could discuss our services with him, the things that work well and the challenges we face.

“We need to work closely with our colleagues in the police force and hope we will be able to build on his interest to improve the services we provide. Our new, state of the art inpatient facilities at Kingfisher Court in Radlett are an important part in our plans to develop safe, high quality services that support recovery and we look forward to showing them to the Commissioner in the future.”