The Home Secretary has praised David Lloyd today (Tuesday 18th November) as an example of a Police and Crime Commissioner (PCC) who is leading change in the police service.

Speaking at the annual general meeting of the Association of Police and Crime Commissioners in Harrogate, Theresa May said that PCCs were providing accountable local leadership, engaging with communities, driving forward change and contributing positively to debate on national policy. 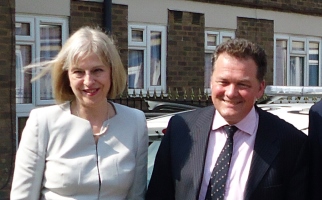 On the subject of collaboration, she recognised Commissioner Lloyd’s work in setting up a national group that seeks to support bluelight services in this area.

Addressing the conference, which included PCCs from across the country, she said: “Many of you are also pursuing collaboration between forces and with other emergency services to deliver more effective services and better value for money for the taxpayer.

“I am grateful to David Lloyd the commissioner in Hertfordshire for leading the cross Emergency Services Collaboration Working Group – which has been jointly funded by all three emergency services departments – for taking this agenda forward.”

The working group includes senior leaders from all the emergency services and was set up to provide strategic leadership bluelight collaboration on a national level.

The group was formed in September this year, after Commissioner Lloyd’s office was granted funding from the Department of Health, the Department of Communities and Local Government and the Home Office to oversee the group.

Commissioner Lloyd said: “I’m glad that the Home Secretary highlighted the work of this group as collaboration between the emergency services is a means by which we can improve the service delivered to the public while also meeting the financial challenges that we face.

“The working group has been set up to provide the necessary leadership and support to help collaboration projects happen more efficiently and with fewer obstacles in their way.

“The funding from three government departments and the recognition today from the Home Secretary shows how important the work of this group is.”

Mrs May concluded her speech saying that PCCs were “making a real difference” across the country.