The Police and Crime Commissioner for Hertfordshire saw how diverse parts of the community are playing their role in community safety and crime prevention during a recent visit to East Herts. 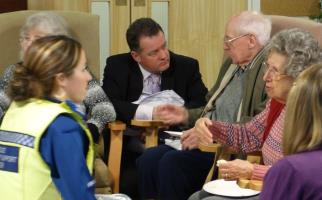 David Lloyd spent a day (Wednesday 3rd December) focusing on particular issues in the district, starting off with a meeting with Chief Inspector Gerry McDonald at Bishop’s Stortford Police Station. The Commissioner sat in on Hertfordshire Constabulary’s Daily Management Meeting where senior officers from around the force discussed the crimes over the previous 24 hours and an action plan for the next 24 hours.

Following this he visited the Port Jackson pub in Bishop’s Stortford to sit in on a Pubwatch meeting made up of landlords and licensees from the town’s pubs and bars. Pubwatch is a scheme run by the licensed premises in the town with support from police and licencing authority East Herts Council. The group can identify and ban individuals who have caused trouble from all the pubs and bars participating in the scheme.

Commissioner Lloyd listened to the group as they went through their regular business but also spoke to them about his views on how businesses can contribute to crime prevention and public safety. He discussed with them his view on pub security systems such as Scannet, which checks and records the identities of all those entering the establishment and can be used by police in the event of a crime occurring inside the premises. He was pleased to hear that one venue in the town – the nightclub Bacchus – is in the process of installing the system.

The Commissioner then visited Spellbrook Primary School where he saw first-hand pupils taking part in the Slow4Schools programme. This scheme aims to encourage speeding drivers to slow down by putting them face-to-face with the youngsters, many of whom have to cross the road on their way to school in the morning. Motorists caught driving over the 30mph speed limit outside the school were pulled over and addressed directly by the schoolchildren about the dangers of speeding.

In the afternoon he visited Valley Court sheltered accommodation (managed by South Anglia Housing) where sixth form pupils from the Bishop’s Stortford High School were visiting the residents as part of Operation Stomp. The operation is a crime prevention initiative led by East Herts police to help make vulnerable people in the community less likely to be targeted by criminals. Activities such as garden tidying are completed so that distraction burglars and rogue traders are less likely to identify the properties as lived in by while crime prevention advice is given by police and volunteers with this aim. The Commissioner, pictured top, spoke to young people and residents taking part in the scheme.

Policing East Herts’ large rural community was the theme of the next part of the day as the Commissioner was given a tour of the area around Watton-at-Stone by local Safer Neighbourhood Sergeant Duncan Wallace.

The day also saw meetings with Steve Kensington, anti-social behaviour (ASB) manager for Circle Housing Association and Brian Simmonds, head of Community Safety and Health Services for East Herts Council. For the Commissioner this was a chance to discuss partnership work with organisations that often find themselves dealing with issues related to ASB, low level crime, domestic abuse and community safety. 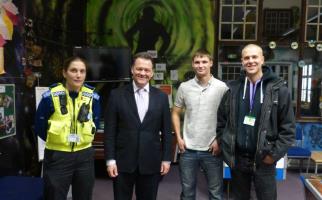 The final appointment of the day was a visit to the Northgate Youth Centre, left, where he saw how Herts County Council’s Youth Connexions service provides a support and diversionary service for young people in Bishop’s Stortford. The project provides a safe place for young people to relax, socialise, take part in activities such as sport or music and get advice from youth workers. The Commissioner was shown around the facility by some of the young people themselves and discussed their experiences with them and their perceptions of crime.

Commissioner Lloyd said: “This was an excellent opportunity to see numerous projects where young people, housing associations, councils and businesses are working with police to protect vulnerable people, reduce crime and improve the overall quality of life for people in East Herts. This district has a diverse make up of rural and urban areas and I was pleased to see that community spirit exists throughout all the areas I visited.

“I was particularly pleased to see the young people involved in making the roads safer outside Spellbrook Primary School, helping make older generations safer at Valley Court and positively engaging with each other through Northgate Youth Centre.”