The Police and Crime Commissioner for Hertfordshire visited an NHS centre near Radlett for people recovering from mental illness and took part in an Environmental Action day in Borehamwood during a Hertsmere ‘district day’.

On his second visit to the borough as part of his series of bi-annual full day visits to every district in the county, Commissioner David Lloyd spent a day (Thursday 18th December) with police, council, fire service and NHS staff as well as teachers and pupils at Borehamwood’s Yavneh College and Hertsmere Borough Council leader Cllr Morris Bright. 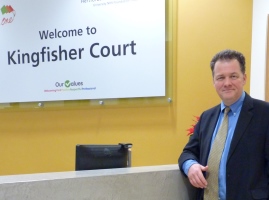 Commissioner Lloyd said: “On the day that the government announced changes to the way people with serious mental health issues are treated, it was timely that I was able to visit Kingfisher Court, an impressive NHS centre designed to support people during their recovery from mental illness.

"It is now the designated place of safety for the police in Hertfordshire to use, instead of keeping those suffering mental health crises in police custody. Custody should be only used for those suspected of criminal activity, not those who are ill and vulnerable.

“This is one step towards improving mental health care for those in crisis, which the recent Concordat for Hertfordshire that I signed along with more than 20 other local agencies, is aiming to achieve.”

A housing officer, environmental health officer, PCSOs and fire fighters visited shops and homes in the vicinity giving safety advice and checking hygiene and for breaches of regulations for multiple occupancy properties and rented accommodation. 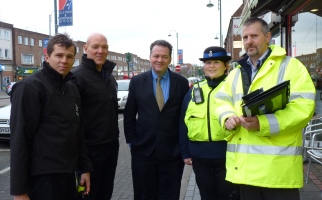 Arrangements were made for five smoke detectors to be fitted at properties and the team spent time with shop managers offering crime prevention advice and providing posters aimed at deterring shoplifters.

Commissioner Lloyd then attended a police briefing at Borehamwood about a joint operation led by the Metropolitan Police involving Herts and Thames Valley Police to tackle travelling criminals, particularly burglars.

Inspector Richard Johnson, from the Hertsmere Safer Neighbourhood Policing Team, later accompanied the Commissioner to Yavneh College which is the highest performing state-funded faith school in the country.

The secondary school educates only Jewish children but its ethos includes integration with the community and opens its sports facilities for all to use.

After a meeting with Council leader Cllr Bright, Commissioner Lloyd visited Kingfisher Court near Radlett for his final stop of the day.

Cllr Bright said: “It was good to welcome the Police and Crime Commissioner to Hertsmere once again so that he could see first-hand some of the on-going work to help keep the borough safe and a pleasant place to live and work.”

The Commissioner’s ‘district days’ are events dedicated to visiting one of the county’s 10 districts or boroughs, learning about local issues and visiting projects, initiatives and groups related to reducing crime, tackling anti-social behaviour or public safety.

The days allow the Commissioner to focus in depth on one particular geographical area.