Police and Crime Commissioner David Lloyd has lent his support to a road safety scheme in St Albans District which aims to encourage speeding drivers to slow down. 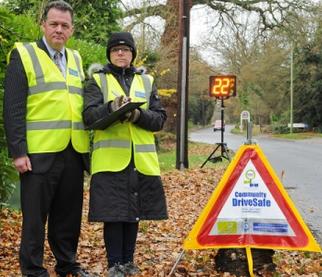 The aim of the Commissioner’s Community DriveSafe initiative is to empower residents to do something about the problem. Volunteers do roadside speed checks with police speed monitoring equipment.

Vehicles seen driving over the limit of the road have their details taken down and their owners later receive a letter from police about their driving.

The Park Street scheme was set up several months ago following concern from some residents about speeding in Park Street Lane.

Up to now, the scheme has been jointly-run by volunteers and officers from the Safer Neighbourhood Team however it is hoped that more concerned local residents will come forward so it can be entirely volunteer-run.

The Commissioner and the Mayor of St Albans City and District are now calling for more volunteers to come forward.

Commissioner Lloyd said: “I’m delighted to support this DriveSafe scheme. It is clear that the current volunteers are committed and enthusiastic – they just need some more numbers to take part and it can become self-sufficient.

“I urge anyone else living in Park Street who is concerned about speeding and road safety in the village to come forward and join the team.”

Cllr Geoff Harrison, Mayor of St Albans City and District, added: “I urge drivers throughout the District to watch their speed and keep within safe limits for all our sakes.

PC Pete Austin, from the St Albans Safer Neighbourhood Team, said: “We have been supporting this keen group of volunteers to help get the scheme off the ground.

“Our hope is now that we can spread the word among local residents and more will come forward as volunteers so that the scheme is self-sufficient.”

For more information about volunteering for the Park Street DriveSafe scheme, or to set up a scheme where you live, visit the Police and Crime Commissioner’s website http://www.hertscommissioner.org/ or email drivesafe@herts.pnn.police.uk.