The Police and Crime Commissioner for Hertfordshire saw first-hand on Monday (12th January) some of the different ways the community and partnerships in St Albans city and district have responded to the threat of crime.

Commissioner David Lloyd spent the day in St Albans for his latest ‘district day’ – a regular event where he focuses on the crime and community safety-related issues affecting one of the county’s 10 districts and boroughs.

During a busy day, the Commissioner met Mark Fordham, right, who is Operations Manager for St Albans Business Against Crime (SABAC), which was only recently awarded a cash grant from the Commissioner’s Community Fund (CCF). The fund supports crime prevention and community safety initiatives in Hertfordshire. 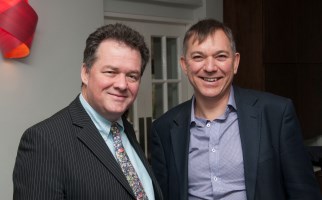 SABAC is a non-profit organisation aimed at reducing crime in the main shopping areas within the district. Many of its members are retailers and the group use shop radios to communicate with each other, the police and the CCTV control room. The businesses warn and support each other and take steps to deter troublemakers and persistent offenders from using the shops. In December the Commissioner gave the group £2,000 to provide more radios as well as pay for a leaflet campaign to encourage retailers to join the scheme.

Commissioner Lloyd said: “The aims and ethos of SABAC fits in closely a number of themes of my Police and Crime Plan for Hertfordshire. I am keen to encourage the business community to take the initiative in tackling crime, with the support of police. Not only does it make good business sense to deter shop-lifters from taking property but schemes like this help make our city and town centres safer and more attractive to shoppers generally, which in turn encourages prosperity. I was delighted to learn more from Mark about the scheme and I’m keen to see if my office can offer further help to SABAC in the future.” 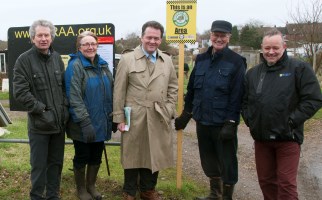 Mr Fordham added: “We are very pleased for the support given by the Police and Crime Commissioner through his Community Fund. This will help to expand the SABAC service in St Albans district and reduce business crime. I was also pleased to have the opportunity to meet the Commissioner and discuss some of the challenges our organisation faces and some of the issues affecting our members.”

Earlier in the day the Commissioner also visited Loreto College to speak to a group of pupils at the secondary school and take part in a question and answer session with them. The children and young people quizzed Commissioner Lloyd on a series of topics such as the impact of PCCs on policing, crime rates and public attitudes to crime.

He also met with the Chief Inspector Ken Townsend and sat in on the Force’s Daily Management Meeting where significant crimes of the previous 24 hours are discussed and the operational response for the next 24 hours is decided upon. He also discussed local policing priorities with the leader of St Albans City & District Council, Cllr Julian Daly, the council’s Chief Executive and Chair of St Albans Community Safety Partnership (CSP), James Blake, and Chief Inspector Townsend, who is also Deputy Chair of the CSP. The group discussed fly tipping and street drinking among other issues affecting the area. The Commissioner was also given a tour of the new location in the Civic Centre where the local policing team will be based when they move there from the Victoria Street Police Station later this year.

The Commissioner was shown around the Sandridge Road allotments, where he was told about how plot holders have been affected by low level crime over the years and the ways the allotment association had responded to it working with partners. New signage, funded by the CSP, warns potential intruders that the area is protected by an Allotment Watch scheme. He heard from the Sandridge Road Allotment Association’s Derek Tarrant, John Willan and Joy Bird, as well as the district council’s Allotments Officer Phil Bruce-Green, pictured above.

The Commissioner’s last appointment of the day was to meet three Police Cadets from the St Albans area, Gabriel Connolly, aged 17, Jamie Head, 14, and Brodie Funnell, 15. The Commissioner asked the trio, and cadet co-ordinator PC Steve Alison, about their personal experiences as cadets and discussed policing issues such as recruitment from ethnic minorities. The group also had the chance to ask him questions. 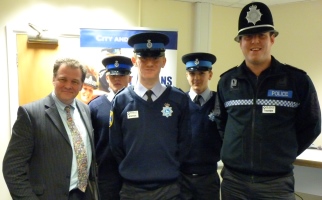 Commissioner Lloyd said: “This was an excellent day and I am grateful to the police, the council officers, cadets and other representatives that I met and had the chance to speak to about their work and their experiences. As ever, it proved to be a valuable insight into the area, what concerns there are and what the priorities are for the district.

“I was interested also to see where police in St Albans will soon be based in the Civic Centre. At a time when forces up and down the country are feeling the squeeze and doing away with local policing, that here in Hertfordshire this couldn’t be further from the truth. I am confident that the Civic Centre will provide an excellent policing hub located conveniently in the centre of the city.”

Cllr Julian Daly, Leader of St Albans City and District Council, said: “The Council is working closely with the police to ensure that a presence is retained in St Albans. There is already an advice and information point at the Civic Centre where residents can get support and guidance on accessing police services. The District is a relatively safe place and we are committed to working with the police to keep it that way.”