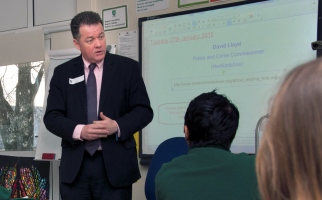 The Commissioner was the latest speaker invited to South Hill Primary School to discuss subjects like the community, jobs and British values, such as democracy.

Year Six at the school (aged 10 and 11 years old) asked the Commissioner questions about crime levels in Hemel, public service and his views on policing.

Commissioner Lloyd said: “I was very impressed by the young people at South Hill – they are a credit to the school and their parents. They had certainly done their research about my role and responsibilities and were able to ask some great questions as a result.”

Sarah Bourn, headteacher at the school, said: “We believe it is important for children to learn about democracy and form opinions about issues that affect them. We were delighted that David Lloyd was able to come and widen the children's knowledge.”