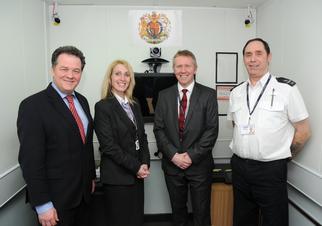 The county’s fourth virtual court, in the custody suite at Stevenage Police Station, reduces the need to move offenders from custody to court by enabling them to appear before magistrates via a video link from a police station. This is not only efficient, in terms of time and travel expense, but reduces risk of prisoners absconding.

Virtual court facilities are already operational at Hoddesdon and Watford Police Stations.  This launch means that all Hertfordshire Constabulary custody units have dedicated virtual court staff. Hatfield Police Station is already housed in the same building as the magistrates’ court. It also has virtual court facilities that can be used by officers for matters such as warrants of further detention and remands to police cells.

Virtual courts are part of a wider project to digitalise, streamline and make the criminal justice system more efficient.  In the past year, 34 per cent of remands (number 683) were heard via virtual courts.

Police and Crime Commissioner for Hertfordshire, David Lloyd said: “Hertfordshire is at the leading edge of using video technology within the justice processes. My Police and Crime Plan, ‘Everybody’s Business’, highlights the need for modernising the criminal justice system and extending the use of virtual courts. I am delighted to see this innovation is now in place in all Hertfordshire’s custody stations.”

Commissioner David Lloyd continued: “Not only does this technology speed up justice but it saves time and money. Not having to move offenders across the county will save officers’ time meaning that they are able to spend more time policing our neighbourhoods.”

Head of Criminal Justice, Detective Chief Superintendent Jane Swinburne said: “Watford and Hoddesdon virtual courts have dealt with around 2,820 cases since they have been operational and seen an average 69 per cent guilty plea rate.

“We are now looking to extend the use of the virtual court and seeking to expedite justice yet further. This month we are starting a pilot at Watford, where less complex cases involving foreign national offenders and people of no fixed abode will go straight before the virtual court for a first hearing. If this is successful we will be able to widen this out to the other custody units and other areas of business.”

Suzanne Gadd, Justices’ Clerk for Bedfordshire and Hertfordshire, said: “The implementation of virtual courts has resulted in fast and efficient prosecutions, enabling defendants in custody to be presented before court promptly; eliminating delay, making effective use of court resources and ensuring swift justice for the people of Hertfordshire.”