A new website, HertsReunited, to help reunite members of the public with their lost and stolen property, is being launched by the Police and Crime Commissioner for Hertfordshire and Hertfordshire Constabulary.

The website features photos of found and recovered items, as well as a facility for people to report their lost property. 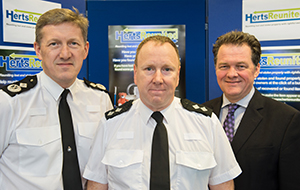 The Police and Crime Commissioner, David Lloyd, said: “I asked for HertsReunited to be created in order to make it possible for people in Hertfordshire to find their lost or stolen property much more easily.

“If someone has had something stolen – or they want to report a lost possession or something they have found – then this website is a one-stop-shop to help reunite them with their property.

“Although crime is low in the county, being the victim of a burglary, robbery or theft – or even just losing a valued possession by mistake – can be a very distressing experience.

“I pledged in my Police and Crime Plan for Hertfordshire that more should be done to ensure that lost or stolen property is reunited with its rightful owners.  HertsReunited is here to help meet this aim.”

The Constabulary takes temporary possession of property which is suspected to have been stolen, but the Force is sometimes unable to locate its true owner.  Likewise, often the Force is made aware of property which has been found in Hertfordshire, but the owner is unknown. Users of the website can now record items that they have lost or found and search the website to see if Hertfordshire Constabulary is holding their stolen or lost property.

Items will be advertised on the website by Hertfordshire Constabulary for around 30 days or an appropriate period until the true owner is identified.

The website is controlled and managed through the current Property Management System (PMS) used by the Force.

Inspector Jeff Scott said: “The HertsReunited website increases our opportunity to reunite people with missing and stolen property with both descriptive information and images of the items.

“As well as the facility for the public to report and claim lost and found property, our keen interest is in identifying the rightful owners of property that the police have seized and that we suspect is stolen. This will help ensure that offenders are brought to justice for their crimes.”

Where found property is reported to police through HertsReunited and the finder stores it for safe keeping, there may be circumstances where that person can claim to keep the item, if the owner does not come forward.

Found property handed into the police station that remains unclaimed is likely to have to be disposed of, but each case will be taken on its own individual merits.  For example, police provide a number of old and damaged bicycles to charitable projects for refurbishment.  Some property is disposed through auction and the funds recouped to support crime reduction.  Police also recycle property which has no value or is damaged.

Inspector Scott added: “Strenuous effort is made by the police to reunite property with the owner.  For example, a camera was handed into police with no identification of its owner.  Examination of photographs on it revealed a picture of a dog which was expanded and police were able to read the address tag on the dog collar and the owner contacted. However, some items prove impossible to identify the owners but we know that they could have sentimental, as well as monetary, value.  HertsReunited gives us a much better chance to get property back to their rightful owners.”

"To develop the HertsReunited system, we worked closely with Hertfordshire Police and built upon an already-strong relationship gained through the supply of the KIM Software Property Management System – the most widely used stand-alone property management system in UK policing.

"The system utilises new technology for this kind of application which allows for the secure collection and movement of data between police systems and the public, offering the potential to completely change the way that the public interact with the Police. The HertsReunited project is on track to achieve all of its aims, providing a better service to the people of Hertfordshire while reducing the costs and resources needed to supply this service."