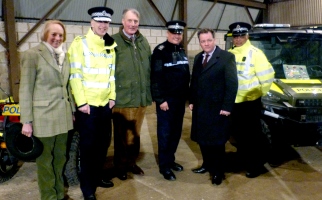 The event, which was held within the grounds of the Woodhall Estate in Watton at Stone and was hosted by estate owners Ralph and Alexandra Abel Smith, aimed to discuss how the police can work with local people and businesses to reduce and prevent rural crime, reduce the fear of crime and to reduce anti-social behaviour to improve the quality of life for local rural communities.

Attendees heard talks by the Chief Constable Andy Bliss, PCC David Lloyd, East Herts Chief Inspector Gerry McDonald and Sergeant Duncan Wallace.  They spoke about what the police and partner agencies are doing to tackle rural crime and how to prevent crimes which are specific to rural areas, including wildlife, environmental and heritage crime. Subjects covered included fly tipping, poaching, hare coursing, fuel theft, thefts from sheds and the effective use of ANPR in disrupting criminals from using the county’s rural roads. This was followed by a question and answer session.

During the event, attendees also had the chance to see how the force’s ATVs (All Terrain Bikes) or Quad Bikes have been fitted with video cameras and how affective they are in recording police operations which will prove invaluable for evidential purposes.

The Chief Constable also discussed the equipment and technology the force’s rural police officers now have, such as 4x4 vehicles and mobile data equipment - giving them up to date information about crime and criminals - which will help them to effectively fight crime in the countryside.

Chief Constable Andy Bliss, said: “I’d like to thank Mr and Mrs Abel Smith for hosting the event and making it possible. Barn meets such as this enable rural communities in East Herts to meet with police and partner agencies to discuss issues which affect them on a daily basis in a relaxed and informal environment. They also allow us to update our communities about the on-going police work to prevent and detect rural crime.

“It was a great success and valuable to hear the views and experiences of local people. I hope that it reassured everyone who attended that rural crime is being taken very seriously at all levels.”

Police and Crime Commissioner David Lloyd added “It was good to see so many representatives from rural business, schools, parish councils and partner agencies at this latest barn meet to discuss rural issues. We all have a responsibility to work together to keep our community safe.

“Rural communities can feel ignored by the police because crime is lower than in urban areas, but I am confident the Constabulary is taking rural issues seriously and acknowledging the affect crime has on often isolated communities.  I am signed up to the National Rural Crime Network where I am pressing for more support on countryside issues, such as fly tipping and fly grazing, and will continue to ensure that the Chief Constable keeps rural issues on the local policing agenda.

“I’d like to see more of this type of event and would encourage rural communities to get even more involved with helping to keep their community safe. This can be achieved on a number of levels, from simply keeping the police informed of anything suspicious or by joining schemes such as Neighbourhood Watch and Heritage Watch, to becoming a Rural Special Constable or a Police Community Volunteer.”


Mr and Mrs Abel Smith added: “We were very glad to have had the opportunity to host this event. We enjoy a very strong working relationship with the police in this area and appreciate all of their efforts on our behalf.”