Police and Crime Commissioner, David Lloyd, spend a morning last week in the Borough of Broxbourne finding out about local community safety issues and talking to local volunteers and students.

Commissioner Lloyd started the day (Monday 12th October) at Hoddesdon Police Station for his latest ‘district day’ – a regular event where he focuses on the crime and community safety-related issues affecting each of the county’s 10 districts and boroughs.

He met local police, then visited council offices in Cheshunt where he met local councillors and volunteers before heading off to Turnford School.

Commissioner Lloyd said: “It is always good to get out and about to see policing and community safety in action on the frontline.  Broxbourne has vibrant communities, an active council, energetic volunteers and enthusiastic young people who are all interested in keeping the area they live a safe place for everyone.

“I am pleased to see many areas of my Police and Crime Plan in action, including increasing partnership working, direct public involvement in policing and a focus on supporting victims.”

At the police station the Commissioner was updated on plans to find a potential new base for the Hoddesdon Safer Neighbourhood Team when Broxbourne’s main police station relocates to Cheshunt in the new year. Plans are at an early stage but police are confident a cost-effective and useful office base can be found.

They also discussed the success of Operation Katch to stop dangerous ‘racing’ on the A10. Police are hoping to secure funding for average speed cameras to be installed on a permanent basis.

After a meeting with Borough of Broxbourne leader Cllr Mark Mills-Bishop and Cllr Tim Hutchings, the Commissioner met volunteers to talk about their role in ‘Friends of’.  The group voluntarily work to maintain, improve and promote green spaces in the Borough of Broxbourne and are members of Allotment Watch, a police-supported Watch scheme that aims to prevent theft, damage and other crime at allotments. 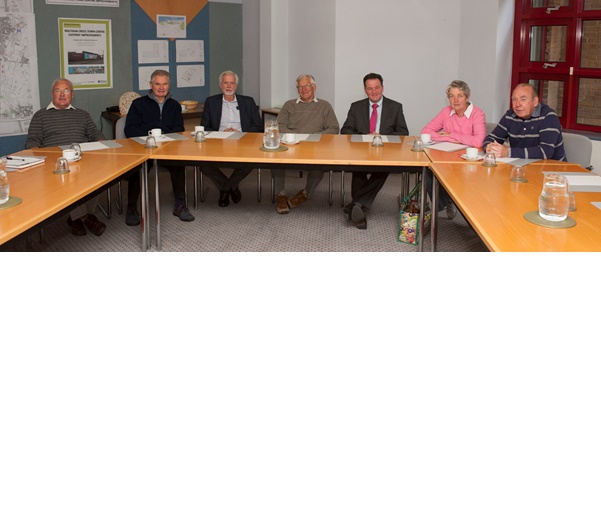 The volunteers spoke about green spaces that they have helped to ‘turn around’ in the 10 years they have been part of the group. They have been acting as the ‘eyes and ears’ of the community, bringing the community together and making parks and open spaces a safe place to enjoy. Anti-social behaviour and graffiti the areas once experienced have now gone away.

Leader of the Borough, Mark Mills-Bishop said: “The Police Commissioner and I had a very productive meeting and discussed issues of benefit to the Borough. It is always a visit I look forward to with a sense of purpose.”

The Commissioner then met Turnford School Principal, Jo Gant, and Assistant Principal Maxine Goodes and Year 11 students.  They probed the Commissioner about his role and what he was doing to ensure Broxbourne is a safe place for young people.