The visit marked the six month anniversary of the innovative and voluntary scheme, which was launched in North Herts at two farm yards in Stagenhoe and Cockenhoe in May this year. ChiPS was originally set up in Watford and Three Rivers in 2011 by the Hertfordshire Fire and Rescue Service (HFRS), along with qualified riders from the British Horse Society.

The project relies on volunteer riders to use their horses to patrol their local communities off the beaten track and to watch out for rural crimes, such as, fly-tipping, hare coursing and arson. They also report animal welfare concerns, security issues, such as broken gates or fences and potential fire hazards like dry hay bales around harvest time.

Julie Springett, (Watch Manager), Fire Safety Coordinator for Hertfordshire Fire and Rescue Service, is also a qualified riding instructor and responsible for developing the scheme in the district. The scheme was awarded funding for the project by the North Herts District Council (NHDC), Community Safety Partnership, which has since been invested in equipment and the uniform that the volunteers use and wear.

Julie said: “ChiPS is very well received by the public and the HFRS has had a fantastic response from the local equine community to become involved in the North Herts Scheme. We have had great success since the project was launched in May and the recording of crime incidents appears to have reduced over the summer and since the launch of the scheme.”

There are currently 8 volunteer riders based across both farms, who have already contributed 230 voluntary hours, carried out 144 patrols and successfully reported 11 incidents to the local authority. 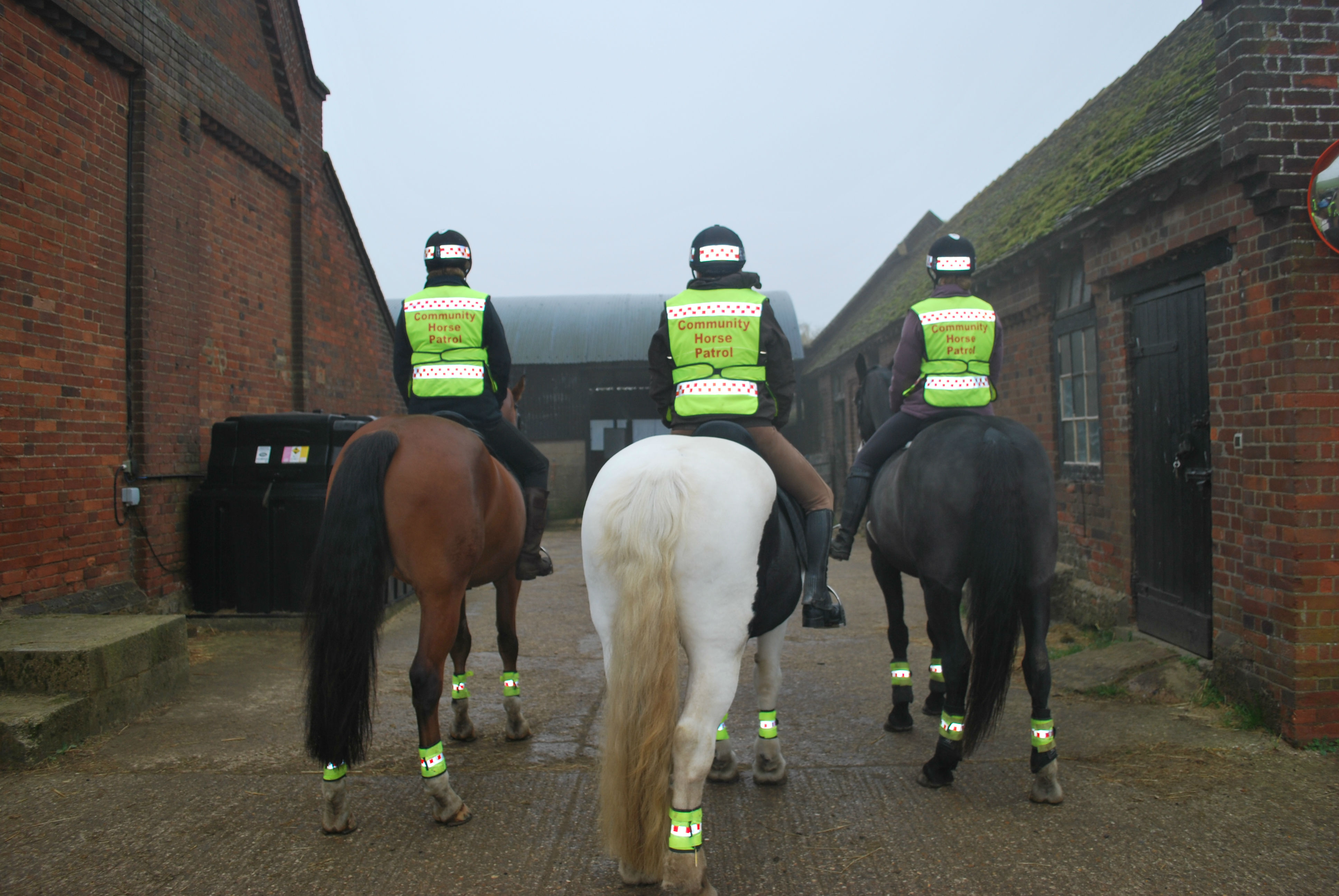 Volunteer riders note criminal activities and environmental issues, which are then reported directly to an Environmental Crime Officer at the North Herts District Council, who deals with the matter accordingly.

Sally Robertson who is part of the scheme at Stagenhoe Bottom Farm said: “We all saw volunteering for North Hertfordshire Fire Service's CHiPS initiative as a great opportunity to combine our love of hacking in the Hertfordshire countryside with contributing to the community, by being additional eyes and ears for the service.

After an assessment of our riding ability, our horses' suitability for the role and a brief induction, we were issued with our uniforms and encouraged to get out there and start patrolling.  Our reports of fly-tipping have been responded to promptly by Hertfordshire council, and our uniformed presence has been received with great interest from the public when they see us out and about.  We are all very proud to be part of the CHiPS initiative."

Deputy Police and Crime Commissioner, David Gibson added: “Volunteering  and supporting communities to do their bit to keep our county safe is at the heart of David Lloyd’s Police and Crime Plan and CHiPs is great example of just how well this can work.  I was really pleased to see the enthusiasm of the riders and the impact their work is already making.  We would like to see even more groups like this set up in Hertfordshire.”

For further information on ways to get involved with the scheme contact Julie Springett at julie.springett@hertfordshire.gov.uk