Thirteen new Special Constables were warmly welcomed into Hertfordshire Constabulary during their Attestation Ceremony at Police Headquarters on Thursday (March 14).

Special Constables have full police powers, uniform and protective equipment and work alongside the regular force.

During eleven weeks of training, the new recruits learnt about basic law around theft, public order, assaults, traffic, powers of arrest and Stop and Search. They also used a virtual learning environment which trained them in legislation.

Each graduate went through a rigorous selection process and had to pass a final exam and practical assessments to enable them to qualify for the role of Special Constable. 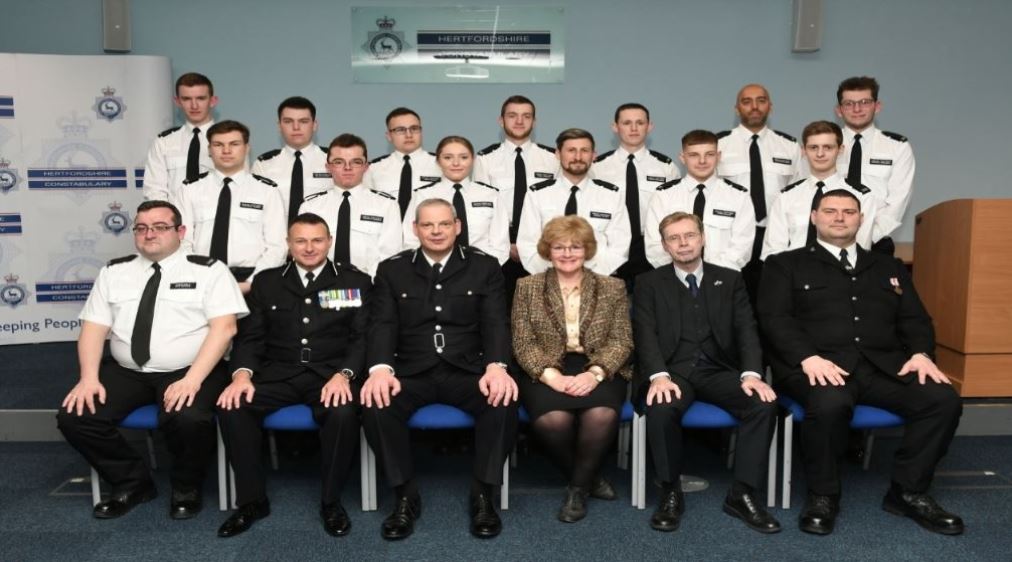 Those who graduated are:

Over the next 12 months, the new recruits will continue their training, allowing them to pass out as substantive Special Constables once they are assessed as fit for independent patrol.

Assistant Chief Constable Nathan Briant awarded the Specials with their certificates. He said: “It is a great honour to welcome these new Special Constables to the Constabulary. The work they do is vital in helping us to police the county. I want to wish them all well as they now move on to undertake this important role within the communities of Hertfordshire.”

Special Constabulary Chief Officer, Mark Kendrew said: “I was delighted to meet our new Special Constables and I am very proud to welcome them to our dedicated team. They have been through a rigorous recruitment process and spent a number of weeks completing the intensive training required to fulfil the role of a Special Constable.

“Becoming a Special Constable brings with it the promise of being involved in something exciting, worthwhile and that makes a real difference in the local community as well as having the chance to learn new skills. I have no doubt they will make a significant contribution to policing in Hertfordshire.”

Kevin McGetrick, Head of Victims Services at Hertfordshire Police and Crime Commissioner's office said: ““As these new recruits embark on their journey with the Special Constabulary it was particularly pleasing to see the depth of support to wish them well, not only from friends and family but civic dignitaries and local councillors.

A short film has recently been launched to showcase the exciting role of a Special Constable in the hope it will encourage more people to volunteer with Hertfordshire’s Special Constabulary. You can view the video on the Herts Police YouTube channel at youtube.com/hertspolice

Special Constables get involved in all areas of frontline policing - from high visibility patrols around pubs and clubs at the weekend and being called to assist at the scene of a road traffic collision or burglary to arresting offenders or reassuring and advising residents after a crime has occurred. Hertfordshire Constabulary are piloting ‘Career Pathways’ and have a number of specialist opportunities for officers.

Once initial training is complete, Specials are posted to local response or neighbourhood teams and are coached by regular officers to complete their Police Action Checklists and are then deemed fit for independent patrol.  On average this can take around 12 months. Once the officers are fit for independent patrol, they can apply for a posting to one of our specialist teams.

Those with an interest or expertise in countryside and rural issues can become Rural Special Constables who are dedicated to the needs of rural communities. They work alongside our Rural Operation Support Team (ROST) and local police Safer Neighbourhood Teams investigating heritage crime or wildlife offences, tackling hare coursing or poaching, to dealing with fly-tipping or crop damage.

If you would like more information on becoming a Special Constable, visit www.hertspolicespecials.co.uk and click on ‘register your interest’ to receive an application form (please check your junk folder!) or browse the pages to find out more. You can also view our new video and read case studies from some of our officers who feature.