Hertfordshire Police and Crime Commissioner discussed knife crime with the Prime Minister at the Serious Violence Summit yesterday (Monday).
Mr David Lloyd was invited to the round table meeting at 10 Downing Street with Theresa May, Home Secretary Sajid Javid and Cabinet members about serious youth violence and knife crime.
Proposals Mrs May put forward called for “a great cooperated long-term effort” from other bodies including NHS workers and teachers.
Speaking after the event Mr Lloyd said: “I am very supportive of the government proposal which says that we cannot just arrest ourselves out of this problem.
“During the discussions I made the point that knife crime is different in the rural areas, such as Hertfordshire, than it is in the urban areas, but the threat is still there. 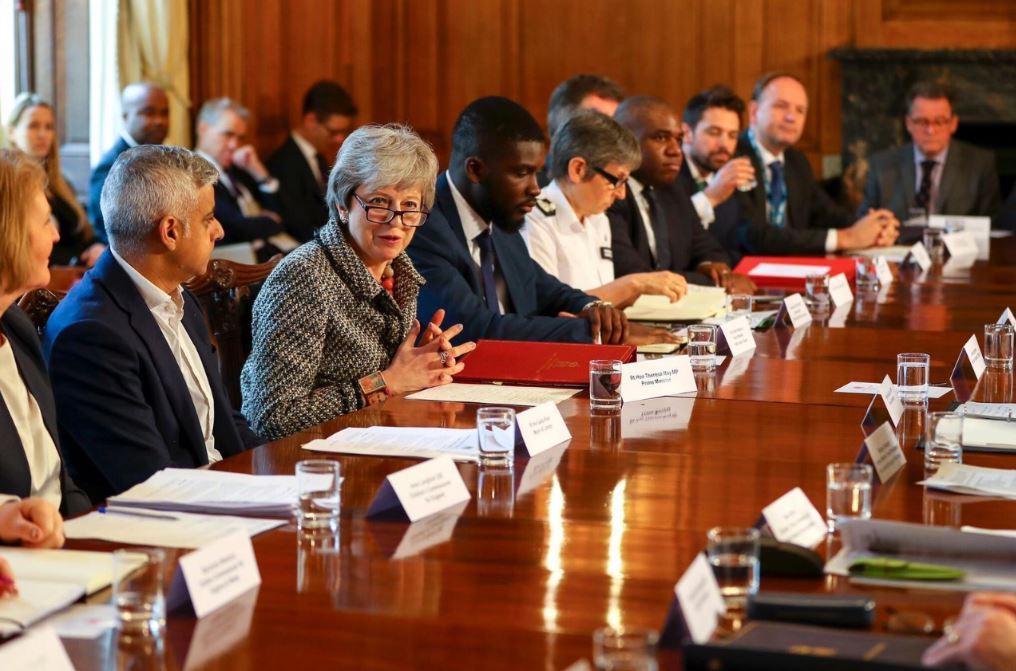 “We face the threat of travelling criminality from London and other areas spilling over into our county. Hertfordshire remains a very safe county but we all have work to do to tackle this menace.”
The two day summit was attended by more than 100 experts including Met Police Commissioner Cressida Dick and Baroness Newlove, the victims’ commissioner for England and Wales.
The government says its plan is intended to "help spot the warning signs that a young person could be in danger, such as presenting in A&E with suspicious injury, to worrying behaviour at school or issues at home".
Last month a major new initiative to tackle knife and serious violent crime across the county was to be funded by Mr Lloyd.
The £280,000 scheme aims to safeguard 200 children and young adults in Hertfordshire who are at risk of being drawn into gang activity and other serious offending.
He approved a £140,000 Community Safety Grant from his office which will be matched by Hertfordshire County Council and District councils.
The money will be used to recruit additional SOS St Giles’ Trust youth project workers over the next year who will focus on early intervention and targeted help for young people at risk.

ENDS
BACKGROUND:
A record number of knives have been surrendered in Hertfordshire as the latest knife amnesty comes to a close.
The Force has been taking part in the national event which ran from March 11 to March 17. This latest amnesty has resulted in the largest haul to date of unwanted knives and other potential weapons in the county.
The amnesty was part of a national campaign, Operation Sceptre, being run by police forces across the country to reduce the number of illegal knives in circulation. Due to an increase in knife-related incidents across the country over the last three years, the amnesty provided a great opportunity to issue some strong messages and advice about the risks of carrying a knife in public.
During the amnesty 680 knives were deposited in the bins at police stations in Hatfield (216), Stevenage (105) and Watford (78) which included swords, military knives, knuckle dusters and a large amount of kitchen knives. Over 250 items were surrendered during operations in Potters Bar, 21 were surrendered at bins in St Albans Civic Centre and seven knives were also surrendered in the permanent bins located in Waltham Cross.
Other activities carried out during the campaign included test purchasing operations with cadets, to ensure retailers were adhering to laws regarding knife sales to those under 18.
Police and Crime Commissioner for Hertfordshire, David Lloyd, said: “These amnesties are an integral part of Hertfordshire’s Serious Violence Strategy to reduce the number of knives on the streets, but also to send the message out that carrying a knife won’t keep you safe.
“The response from the public has been very good and we have had some great feedback. However, we all need to continue to work together In Hertfordshire to ensure young people are aware of the risks of carrying a knives.”
Inspector Andrew Palfreyman from Hertfordshire Constabulary’s Crime Reduction Unit who led the campaign, said: “Once again we’ve had a great response to the amnesty, with more knives handed in than during our previous amnesties. The amnesties not only reduce the number of knives in circulation but also gives forces a good platform to conduct a whole range of related operations including knife sweeps, knife arch detections and test purchase operations.
“The amnesties form part of our three year Serious Violence Strategy for dealing with knife crime in the county. As part of this strategy we are working with our partners in education, local government and social services to educate young people about the potential consequences of carrying a knife. We will also be looking at the impact that knife crime has on individuals, their families and communities and how knives are getting into the hands of under 18 years olds.  The unlawful use or possession of a knife is unacceptable and will not be tolerated in Hertfordshire’ and we will continue to target those we know are carrying knives.”