More than 150 guests came together at Police Headquarters in Welwyn Garden City last night (Thursday, June 6) to celebrate the valuable contribution that volunteers make to the Constabulary.

It also recognised the achievements of Hertfordshire’s Special Constabulary and those who volunteer in schemes that provide independent scrutiny delivered through Hertfordshire’s Police and Crime Commissioner’s office. 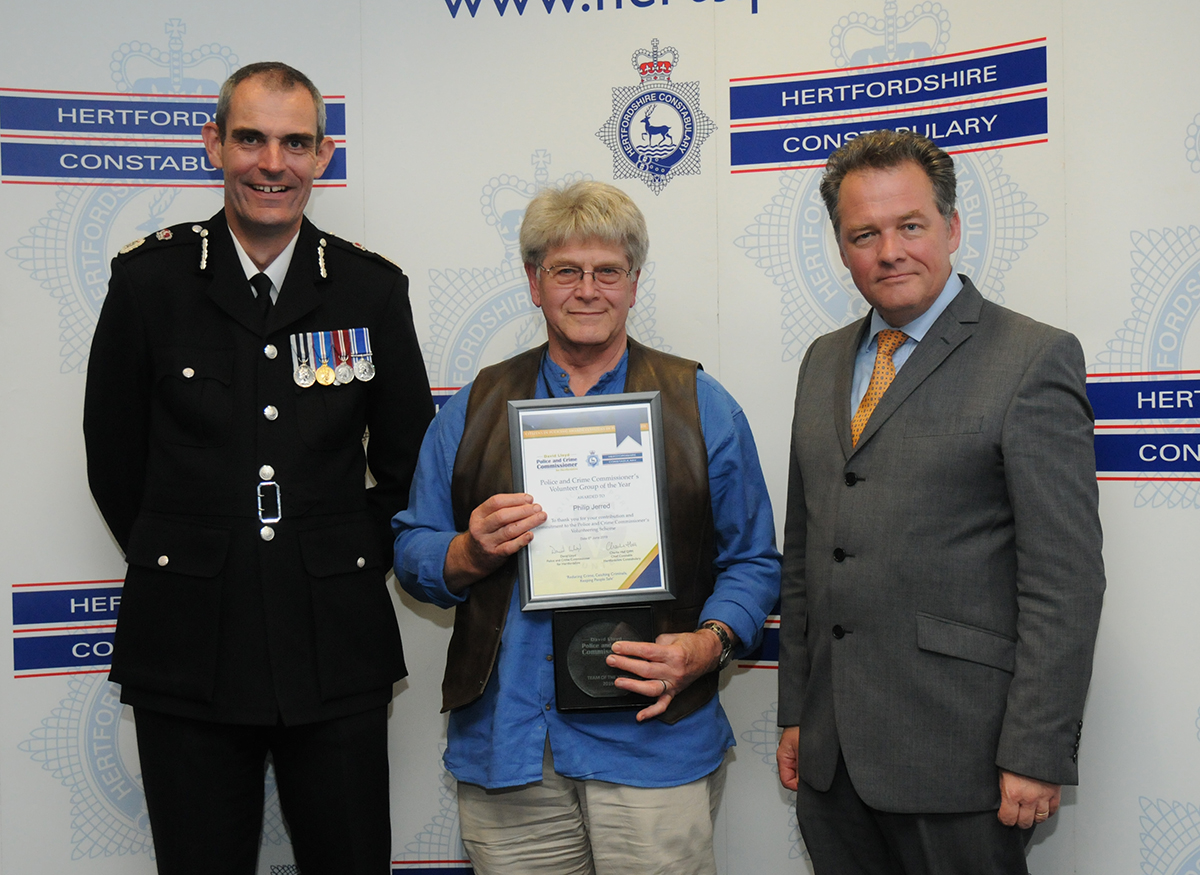 The ceremony was opened by Superintendent Julie Wheatley, who leads the Constabulary’s Workforce Development department, before Chief Constable Charlie Hall, Commissioner David Lloyd  and guests of honour Lord-Lieutenant of Hertfordshire Robert Voss and High Sheriff Sarah Beazley presented the awards, in front of an audience of volunteers and their family and friends.

The Police and Crime Commissioner’s Citizens in Policing Awards, which were presented by Mr Lloyd and organised by Volunteer Officer Stephanie Evans. 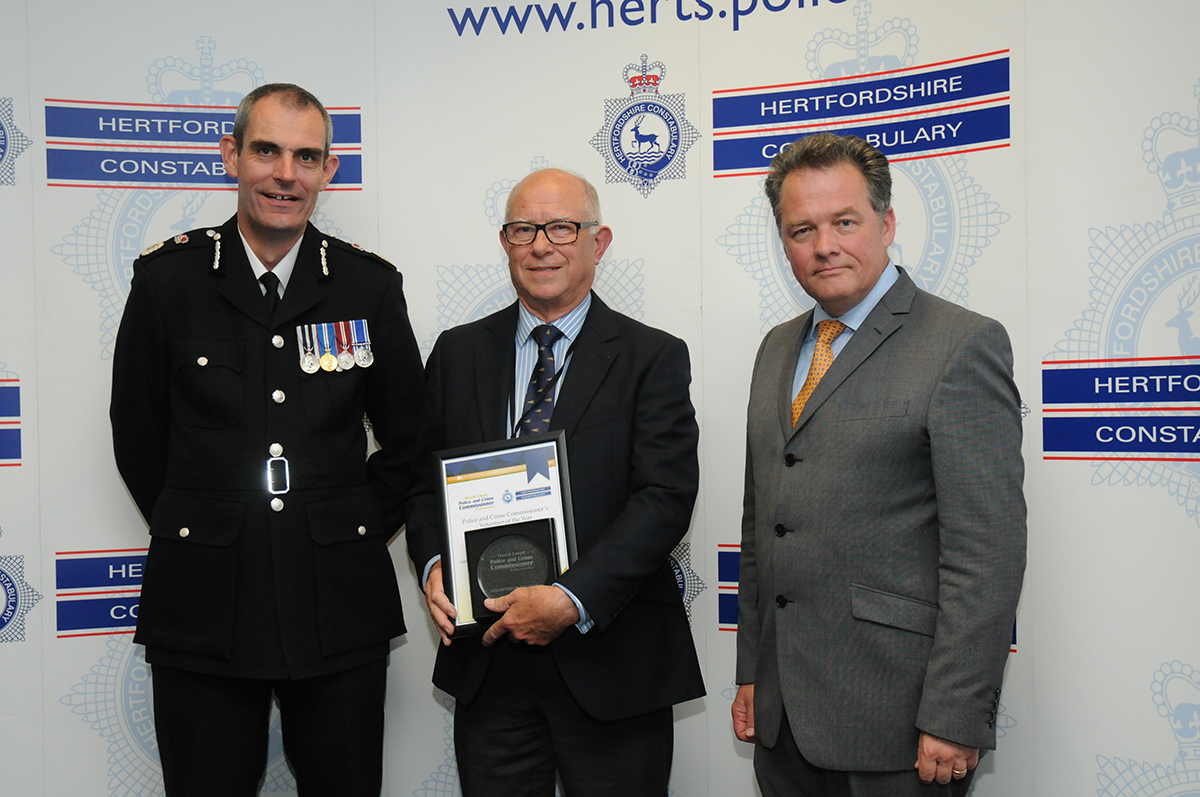 Mr Lloyd said: “Volunteering is the DNA of what makes this country great. I strongly believe that as citizens we all have a role to play in creating and maintaining a safe community. Keeping Hertfordshire the safe county that it is today is Everybody’s Business.
“It is clear that all our volunteers are extremely committed to their roles and I want to take this opportunity to thank them for their hard work and on-going dedication.”

PCC Volunteer of the Year was won by Ben Richardson from the Community DriveSafe Team in Bovingdon. Ben applied for a DriveSafe scheme in Bovingdon in July 2014.  Since that time he has supported and guided his group of volunteers, who rarely miss a month of roadside speed monitoring. Ben has produced resources which he has freely shared with other DriveSafe groups across Hertfordshire, to assist with their vehicular understanding and recording.

The Independent Dog Welfare Advisors took the award for Volunteer Group of the Year. The team are very passionate about the role and the welfare of the dogs is paramount. All of the volunteers have shown their commitment to the scheme by attending all meetings and even freeing up plans to be able to make late notice visits. The volunteers have assisted the Volunteers Team when speaking with other forces to help schemes get up running, share best practice and provided useful insights. During the last year, the six volunteers have completed 45 visits. 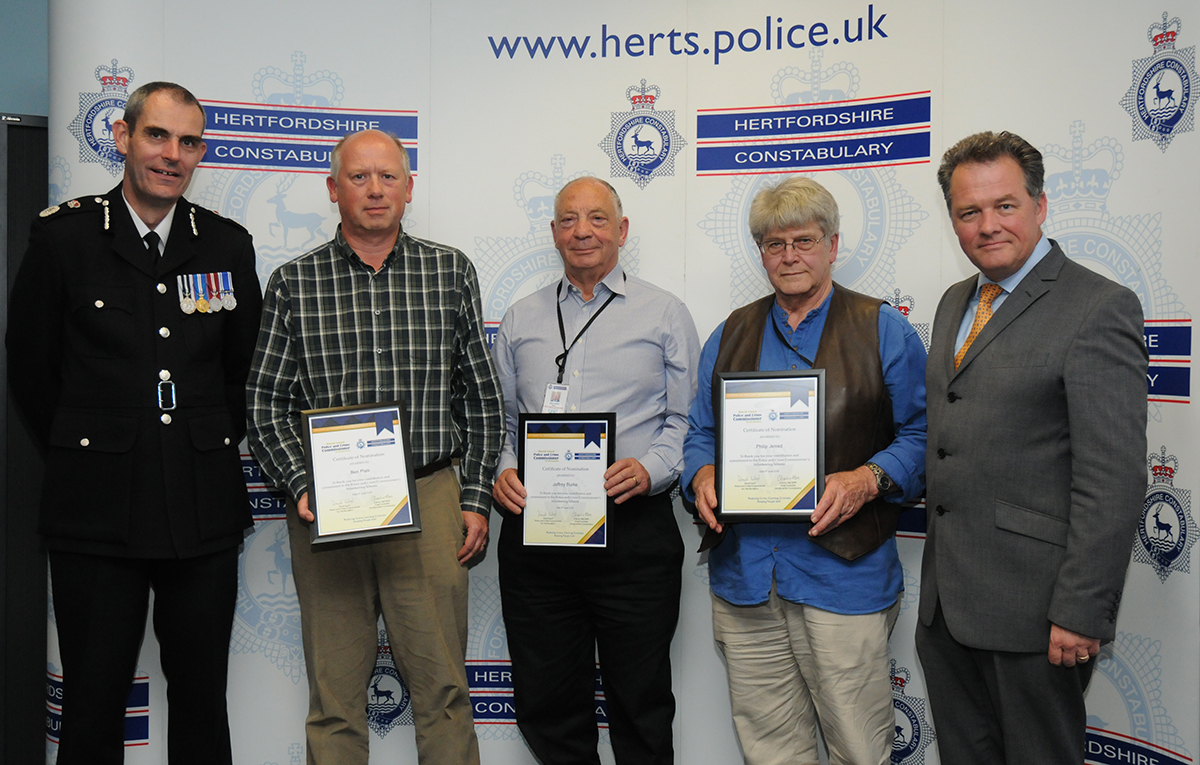 Several other volunteers were nominated for their work

Addressing guests on the night, Chief Constable Hall said: “Hertfordshire Constabulary is committed to working with our local communities to reduce crime, catch criminals and keep people safe. Our Police Support Volunteers play a crucial role in supporting the constabulary to achieve these aims.“I would like to thank all our volunteers for their support and dedication. We value greatly the commitment that they make to policing.”

A new category was introduced this year to recognise Exceptional Contribution to the Mini Scheme. This was won by Olivia Dixon. Olivia has introduced Mini Police into all three schools in her area of Stevenage and one school in the neighbouring ward. She has created two new interactive sessions, one of which was an age appropriate presentation around drugs, after it was revealed by the National Crime Agency that children as young as 11 are being exploited by gangs running county lines drug networks. She shared this presentation with the Mini Police coordinators and it has subsequently been disseminated countywide. She works hard to promote Mini Police and has been on local radio to talk about the programme.

For more information about the Constabulary’s Police Support Volunteer Scheme and how you can get involved, visit www.herts.police.uk/PoliceSupportVolunteers