Hertfordshire's refreshed Police and Crime Plan will be presented to the public and scrutiny panel next week.

Police and Crime Commissioner David LLoyd has listened to feedback and comments from local residents and business during a consultation period last month.

A key part of the comments and proposals in the Plan refer to maintaining a local policing model and how to deploy Hertfordshire’s share of the proposed national 20,000 new officers.

The updated Community Safety and Criminal Justice Plan ‘Everybody’s Business’ will be discussed with members of the Hertfordshire Police and Crime Panel at East Herts District Council Offices, Wallfields, Hertford, on Thursday 19th September. The meeting is starts at 7pm and is open to the public.

Residents, charities, businesses and partners have been encouraged to share their thoughts on how to make the county safer, including how it is policed and initiatives to tackle crime.

New proposals in the draft report include more mobile speed detection vans, the creation of a rape scrutiny panel and a crackdown on lorries driving through villages.

With a large influx of new officers proposed by central government across England and Wales, Mr Lloyd also wants to hear views on where the public wants them deployed. 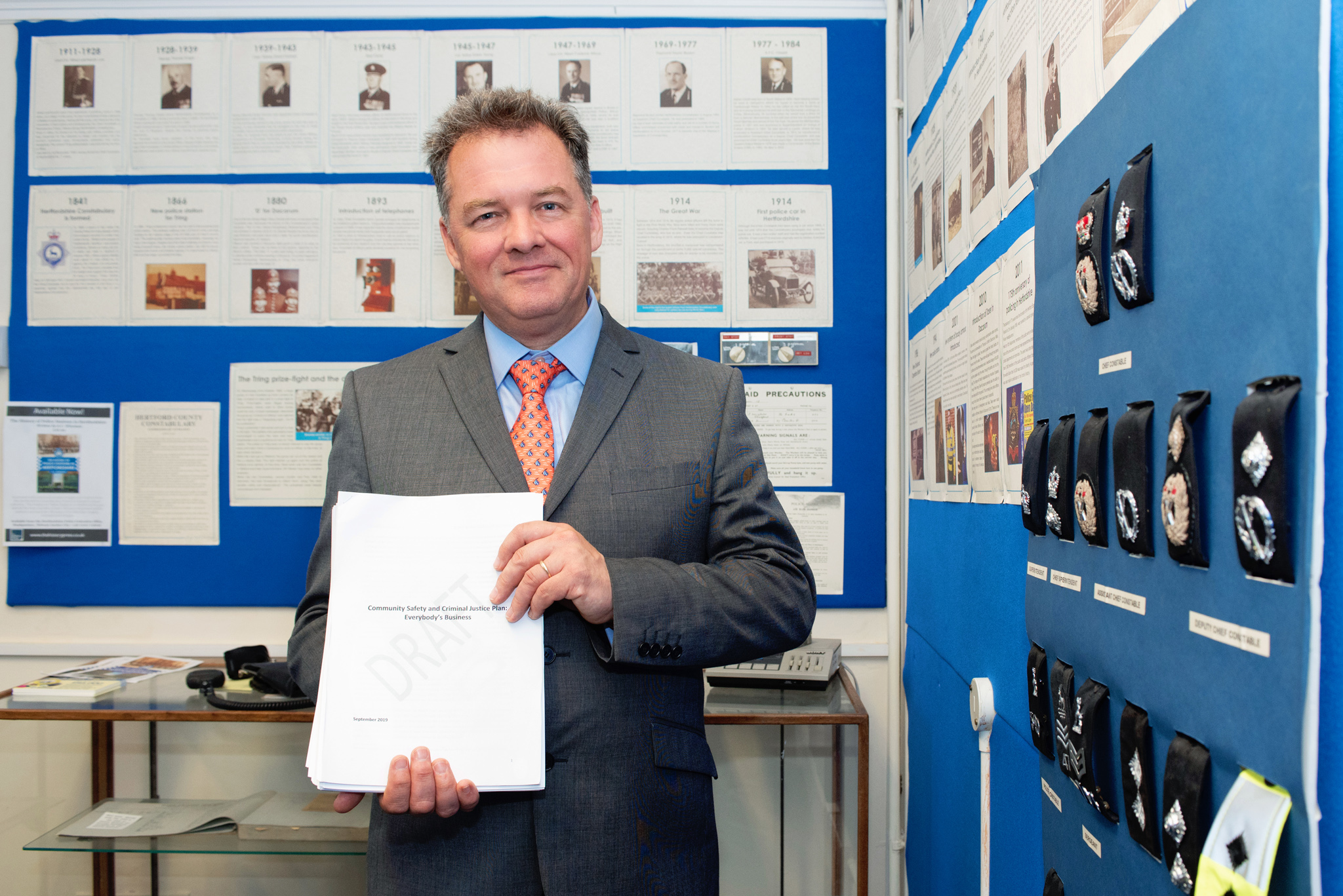 Mr Lloyd said: “I have refreshed the Plan to ensure it remains fit for purpose and relevant to changes in demand and resources. My main concerns are the same as when I came into office in 2012 - putting the victim first and keeping crime low.

The full draft of the Plan is available at the Public Consultation section of the Commissioner’s website at http://hertscommissioner.org/public-consultation .

The core of the plan is centred on four themes: Building on Success, Putting Victims at the Centre, Public Focus and Business Sense.

The Business Sense theme is about working more closely with local businesses, efficiency and taking a more business-like approach to Constabulary and partnership use of resources and assets.

Some of the new initiatives in the Plan include using road safety funding to pay for a pilot scheme for more community safety vans to combat motorists speeding, using a mobile phone or not wearing a seatbelt.
With rape prosecution levels remaining low across the country, a new Hertfordshire Rape Scrutiny Panel is proposed to introduce more transparency and scrutiny into the system.

The panel will look at rape case files where it has been judged that no crime has been committed, or which were said not to have achieved the required threshold of evidence to be sent to the Crown Prosecution Service. This will provide an insight into the effectiveness of the police investigation and identify lessons-learned for the future management and investigation of cases.

A number of residents have raised concerns regarding the volume of lorries that are travelling through their villages that ignore signage around weight restrictions. A pilot scheme is to monitor lorries and heavy goods vehicles in residential areas which misuse weight restricted routes and frequently exceed the maximum load (7.5 tonnes).

More information can be found by visiting the Public Consultation page. You can also follow the Commissioner on Twitter @HertsPCC and find out more on his Facebook page: HertsPCC.