As well as being the Police and Crime Commissioner for Hertfordshire I also lead the national association on criminal justice.

I have given this interview below to the Daily Telegraph outlining my concerns, and that of other PCCs, on a looming crisis in the system as criminal cases are taking up to three years to reach trial. 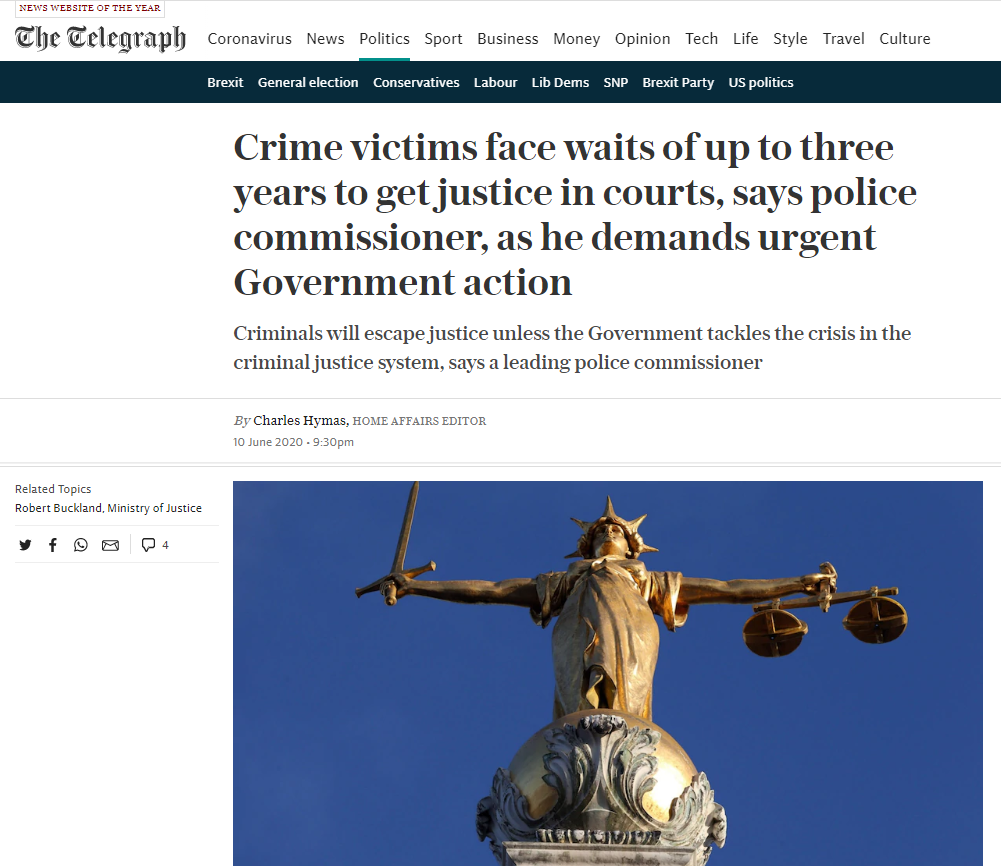 Victims of crime are having to wait up to three years for their cases to come to court and criminals will escape justice because of the growing backlog in trials, say police chiefs.
David Lloyd, lead for the Association of Police and Crime Commissioners on courts, said the backlog built up during the Covid-19 crisis meant some victims would have to wait three years for their offenders to be sentenced.
He warned it would mean fewer guilty pleas as defence barristers would advise clients to play the long game on the basis that their cases may never come to court or be able to be successfully prosecuted.
Mr Lloyd, police and crime commissioner for Hertfordshire, feared witnesses and victims could give up or would not be able to remember key facts if they had to wait three years before giving evidence to a court. “There is a danger people will lose confidence in the criminal justice system,” he said.
Criminals such as burglars and drug dealers would also be free to continue offending while awaiting trial, he added.
In a letter to the Justice Secretary Robert Buckland, Mr Lloyd warned that the criminal justice system faced an “existential crisis” as the backlog has increased from 39,000 to 41,000 during the pandemic.
“There is a unanimous view that the size and scale of the backlog of court cases, and the formulation of coherent plans to address it, is the biggest single issue facing the criminal justice system,” he wrote.
Mr Lloyd said it was not victims but also defendants, citing the case of a 19 year old man accused of rape having to wait until they are 22 to potentially clear their name.
“We should aim that if you go into the criminal justice system, that you are out of it within six months,” he said.
“The criminal justice system is filled with young people whose lives for the most part are put on hold until the trial is over. If it’s six months, that can be managed but if it is three years, that might change their whole life chances. If they are innocent, that is particularly difficult.”
In his letter, My Lloyd laid out a five point plan including better sharing of data to ensure so that criminal justice boards could work out what was needed to reduce the backlog.
The Ministry of Justice (MoJ) should encourage local innovation such as using large halls or sports centres for trials to satisfy social distancing rules.
He also recommended better communication, greater use of technology such as use of video links for court appearances and more delegation of budgets to local centres.
Mr Lloyd feared that without urgent action, the criminal justice system could “grind to a halt.” “The very top of the system who make the decisions don’t yet feel it is at crisis point,” he said.
“The parts of the system that think it is a crisis are at the court door. If you ask the prosecutors, senior police officers or police and crime commissioners, we all think there is a crisis in the system.”
A Ministry of Justice spokesman said: “We understand the frustration of victims and have been working closely with the judiciary and criminal justice partners, including the APCC, to keep the justice system running during this pandemic.
“The backlog of cases in crown courts is significantly lower than it was in 2010 and we’ve reopened more courts and restarted jury trials.”