Hertfordshire’s Modern Slavery Partnership will join organisations across the country for UK Anti-Slavery Day this Sunday 18 October to help raise awareness of the crime.

Anti-Slavery Day provides an opportunity to raise awareness of human trafficking and modern slavery and to also encourage government, local authorities, companies, charities and individuals to do what they can to address the problem.

During the last quarter of 2020, the partnership has been particularly focussed on labour exploitation. Victims of labour exploitation can be any age, gender or race and are forced to work for nothing, low wages or a wage that is kept by their "owner".

Labour exploitation can and does occur in businesses of any size and in any country, including the UK. Modern slavery is surprisingly common and is frequently discovered within the supply chains of large, well-regarded organisations around the world. The National Crime Agency found that labour exploitation is the most common form of slavery in the UK and is increasing in prevalence.

Over the last two months police, local authorities and other organisations within the partnership have been raising awareness through social media campaigns and conducting operations to detect exploitation, as well as talking to businesses within the agriculture and food processing industries where this type of exploitation can occur.

Police and Crime Commissioner for Hertfordshire, David Lloyd, said: “Tackling modern slavery is a key element of my Community Safety and Criminal Justice Plan for Hertfordshire. It is an insidious crime that is happening across our county to vulnerable victims, often without members of the public realising it.

“My office is one of the few PCC offices to fund a dedicated Modern Slavery Coordinator who leads our partnership of over 60 agencies in Hertfordshire.

“Hertfordshire’s Modern Slavery Partnership enables a coordinated strategy and increased awareness. I want to see the Constabulary targeting those who profit from enforced labour, while all businesses must show that it is not taking place in their premises or supply chains.” 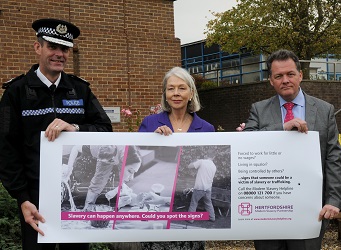 Modern slavery can take many forms, including the coercion of people into forced labour, sex, criminality and servitude. It is a global problem that can affect anyone, regardless of their age, gender and ethnicity.

The aim of the UK Anti-Slavery campaign is to alert local authorities, companies, charities and individuals to the signs of modern slavery and encourage them to report any concerns they might have. Possible signs listed on the partnership website: www.stopexploitationherts.org.uk.

Detective Chief Inspector Doug Black, from the Constabulary’s Serious and Organised Crime Command, said: “Modern slavery and human trafficking is a growing problem in the UK and we know that there are a large number of offences that go unreported. Often victims are not able to come forward themselves or are reluctant or even afraid to engage with the authorities. Therefore it is important that the public are aware of this problem and know how to spot the signs.

“Victims can be forced to work for little or no money, be beaten, sexually exploited and have their lives controlled by others. However, they may still be living or working in plain sight of the public. Learn how to spot the signs and report any concerns you may have, and you could help free someone from exploitation and abuse.”

Chairperson of the Hertfordshire Modern Slavery Partnership, Jo Fisher, Operations Director for Services for Young People at Hertfordshire County Council, said: “Modern slavery is an under-reported and a little understood crime, but it is happening in Hertfordshire right now. People from all sections of society can be affected or become victims of exploitation and it can have a devastating effect on their lives.

“Hertfordshire’s Modern Slavery Partnership brings together all of the county’s agencies to ensure that victims are identified and supported and offenders are brought to justice. Anti-Slavery Day is about raising awareness of this issue amongst the public and local organisations. Last month, we delivered training to local authority housing leads to help them identify and support potential victims. By helping people know how to spot the signs, we’ll be more likely to be able to help victims get the protection they need."

Anyone with concerns about exploitation should call Hertfordshire Constabulary’s non-emergency number police 101 or the national charity-run 24/7 Modern Slavery Helpline on 08000 121 700. In an emergency call 999.