Mr Cocking, who is currently Leader of Broxbourne Borough Council, will assist Mr Lloyd in holding the Chief Constable to account for how Hertfordshire Constabulary is run, and working with partners to prevent crime.

He will also assist the Commissioner to formulating the up-coming new Police and Crime Plan and carrying out public duties.

Former Deputy David Gibson decided to stand down following Mr Lloyd’s re-election for a third term in May earlier this year. 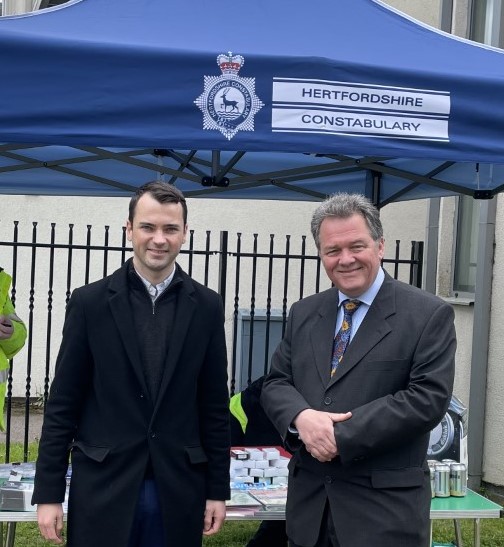 Following the decision Mr Lloyd said: “I am delighted to have Lewis working beside me as his interests and strengths complement my own.

“He will be particularly useful in engaging with younger people across Hertfordshire. This is important for me as they are disproportionately involved in the Criminal Justice System, both as victims and perpetrators.

“Given his expertise and involvement in Local Government, he will also play a key role in ensuring that we work in ever-closer collaboration with partners from District and Borough Councils, the County Council, Health and the Third Sector to reduce crime and put victims at the heart of everything we do.”

Mr Lloyd added: “I would like to thank former Deputy David Gibson for his hard work and unwavering support over the years. He played a pivotal role in keeping people safer and reducing crime in the county.”

Mr Cocking, who will be leaving his job as a policy, communications and funding manager in a global low-carbon energy and services company, said: “As a resident of Hertfordshire I feel extremely proud and privileged to serve the residents as the Deputy Police and Crime Commissioner.

“I’m excited to hit the ground running delivering on the Commissioner’s vision for Policing in Hertfordshire, putting the victims at the heart of everything we do and creating Hertfordshire’s largest ever police force ensuring that the County is an even safer place to live, work and visit.

“Practically I want to enhance the work of engaging with young people across Hertfordshire."

The appointment was endorsed last night (Thursday) by Hertfordshire Police and Crime Panel. The panel is made up of a cross-party collection of local councillors who scrutinise and support the work of the Commissioner.

Mr Cocking is expected to take up the new role by September.